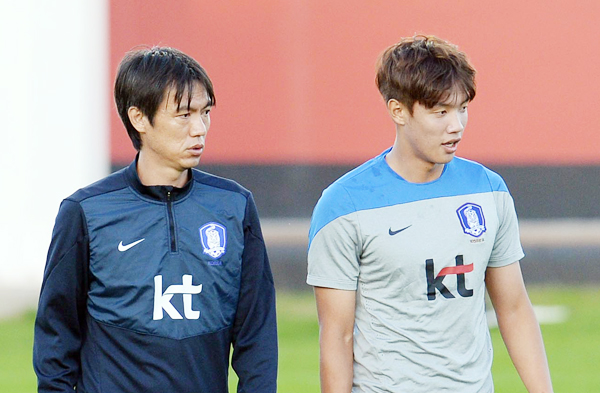 FOZ DO IGUACU, Brazil - After the Korean national team’s poor performances in its last two friendly matches against Tunisia and Ghana, Coach Hong Myung-bo’s biggest worry is his four-back defense, which has looked like an automatic sliding door making way for opponents to penetrate the goal area.

But because Hong chose his final roster a month ago and seems uninterested in making adjustments to it, the best option left for him is to utilize his options as best he can. The biggest concern is center back Hong Jung-ho’s left-foot injury, which put him on the bench for the first half against Ghana on Tuesday, a game Korea lost 4-0.

The coach started veteran Kwak Tae-hwi in Hong’s position, but he failed to rise to the occasion, allowing Ghana to get past him to score their second goal in the first half.

Soon after the team arrived in Brazil yesterday, the coach said in a press briefing that ideally, the defender should rest for a month, but instead he asked him to boost his fighting spirit and play in the World Cup, which kicked off this morning with the opening match between the host Brazil and Croatia.

“The pain in his left foot needs at least a month to fully heal,” the coach said. “Medically, there are no problems to play on the field, and since the pain is in his bone, he should play with that pain. I had a similar pain when I played in the 2002 Korea-Japan World Cup after I was injured in a friendly match against France that we played right before the event. Just like I did, players should stay on the field if there are no problems medically.”

“I worry about the pain in my foot whenever I move,” Hong said. “But I think I need to get rid of the worry. After I heard the coach’s story, I feel like I could do the same thing he did in 2002.”

Since the coach was the captain and the best defender on the 2002 squad, the nation worried whether he could play after his injury. But he started all seven matches in that event, and led the team to the semifinals for the first time in Korea’s history.

The defender injured the top of his left foot in a warm-up match against Tunisia on May 28 when he was tackled by a Tunisian in the 59th minute. He does not have a problem training with the team, but he needs to cool his foot with a huge ice pack after every practice.

“This is a mental game,” the defender said. “I didn’t come here for nothing. I know what I have to do, and I will show what I am capable of on Wednesday [against Russia].”