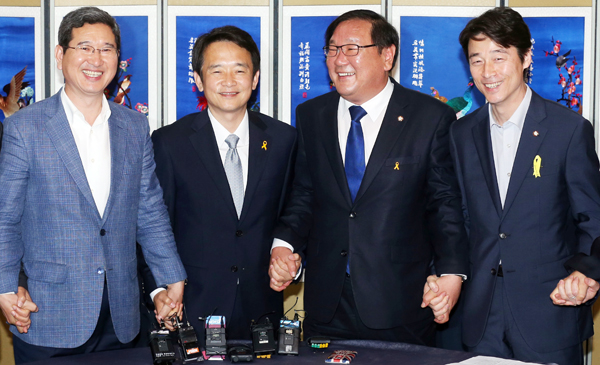 The Saenuri’s Gyeonggi Governor-elect Nam Kyung-pil, second from left, stands with Kim Hak-yong, left, head of the Saenuri Party’s Gyeonggi chapter, and Song Ho-chang and Kim Tae-nyeon, right and second from right, co-heads of the New Politics Alliance for Democracy’s Gyeonggi chapter, at the bipartisan policy conference for the incoming Gyeonggi coalition government yesterday at the National Assembly in Yeouido, western Seoul. The conference came after Nam agreed with Kim’s request for mutual consent on all policies. The four leaders of both parties agreed to set up a committee for policy making by Tuesday, with five people from each party, and begin discussion Wednesday. By Kim Seong-ryong