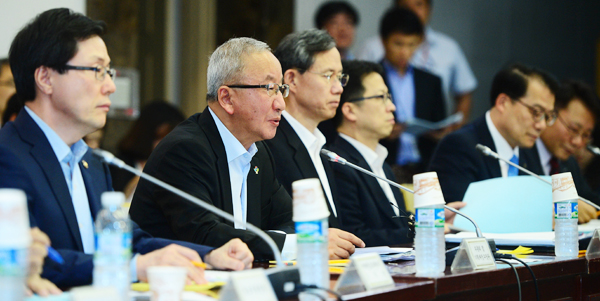 Outgoing Finance Minister Hyun Oh-seok attending an economic meeting at the government’s complex in downtown Seoul, yesterday. After the meeting he told reporters that he has no regrets following his one-year tenure as the nation’s top economic policymaker, and plans to spend his time with family. [NEWSIS]

Choi Kyung-hwan, candidate for the dual job of deputy prime minister for the economy and finance minister, has strong credentials as a three-term lawmaker and former government official.

He and An Chong-bum, who was appointed Thursday to be senior secretary for economic affairs, are both close to President Park Geun-hye and have their own senior-junior relationship as they both obtained doctorates in economics at the University of Wisconsin, Madison.

Choi also was a senior of An in the political world.

For the past 15 months, Hyun Oh-seok, the first deputy prime minister for the economy in 15 years, has shown weaker-than-expected leadership and failed to coordinate policies among branches of government.

President Park restored the deputy prime minister position, which was dispensed with by the late President Kim Dae-jung, and gave more power to the finance minister to whip the economy into shape.

But some analysts and politicians pin the blame for economic disappointment on the excessive power given to Cho Won-dong, Park’s first senior secretary for economic affairs, who is close to the president.

At times, when the Ministry of Strategy and Finance announced economic policies, Cho interceded to change the directions of the plans.

The Finance Ministry had to amend its tax revisions last year a week after Cho intervened and advised the president to order the changes.

Early this year, Hyun again struggled because the Blue House unexpectedly ordered a revision of the first draft of a three-year economic innovation plan.

Unlike Hyun and Cho, Choi is expected to proactively set directions for economic policies and An is expected to follow, according to political analysts.

“Based on Choi’s expertise in the economy and his experiences as a government official and politician, we expect our ministry to gain momentum for executing held-up policies swiftly,” said an official at the Finance Ministry.

Since Choi has been working closely with the ministry to coordinate government policies, it will not take much time for him to grasp how it is doing, the official added.

“There has been some doubt about the role of the deputy prime minister,” said an official at the Federation of Korean Industries. “But the new minister is known for strong leadership and swift action. I remember when he served at the former Ministry of Knowledge and Economy, he supported policies that are friendly for businesses.”

Despite a welcoming atmosphere after the appointment announcement, there were concerns about the myriad of challenges facing Choi.

Under the administration’s creative economy initiative, Hyun made attempts to help growth return as soon as he took office in late March 2013.

The number of newly employed people rose from around 200,000 early last year to 830,000 in February, although the figure has been slowing lately. Facilities investment jumped from minus 11.9 percent to 9.9 percent during the same period.

Hyun deserves some kudos for his work, but a sense of frustration is widely felt.

In the first quarter of this year, the GDP expanded 3.9 percent year-on-year, largely thanks to continuing expansion of exports and a significant increase in construction investment. Private consumption, on the other hand, grew a mere 0.3 percent, halved from the fourth quarter of 2013. In April and May, due to the impact of the Sewol ferry tragedy, the Korean economy faltered again as consumers stopped buying and many retailers’ sales plunged.

The real estate market is still stuck in the mud due to government policies that keep changing.

Falling tax revenue is also going to be a difficulty for the new finance minister.

“The most important task for Choi will be achieving 4 percent growth in GDP,” said Oh Jung-gun, president of the Asia Finance Society. “Choi should show strong leadership by leading other ministries to normalize the real estate market, address the household debt problem, create jobs and establish a creative economy.”

Meanwhile, Choi Yang-hee, nominee for the minister of science, ICT and future planning, also got a lot of attention yesterday, increasing expectations for the president’s creative economy initiative.

Park established the Science Ministry to give it control of her creative economy campaign. But current Minister Choi Mun-kee’s leadership didn’t seem so effective in pushing policy negotiations with other ministries.

Since the National Assembly’s Science, ICT, Future Planning, Broadcasting and Communications Committee was established last year, the committee passed only one bill submitted from the Science Ministry regarding enforcement of ICT development policies, which didn’t have much influence on the industry or other ministry’s policies.

After illegal mobile phone subsidies resulted in operation suspension for the three mobile carriers, the committee finally passed the Mobile Device Distribution Act on the last day of April, along with 132 bills, including broadcast industry regulations and personal information protection actions.

The telecom industry said the act will not stop illegal subsidies because they are often offered by small unauthorized sellers that the big telecoms can’t control. Even after the two-month operation suspensions, illegal subsidy events still happened earlier this week for new smartphones such as the LG G3 and Samsung Galaxy S5.

The telecom industry is hoping Choi will take a more aggressive approach in pushing bills at the Assembly and when working with the industry.

“Choi is a college professor but has also been involved in telecom-related private associations,” said a high-level executive from the industry. “He will lead various projects in well-managed cooperation with private companies.”

Some analysts hoped the new minister would take a stronger interest in creating a better business ecosystem for start-up and midsize companies.

“He is a professor, but he is also a Samsung man,” said Lee Myung-ho, director from Korea Creative Economy Research Network. “The core of the creative economy initiative is to balance the current business environment to give more room for smaller companies to stand up on their own. I hope Choi will not drive his efforts in a pro-conglomerate direction.”