Korea, Canada sign FTA to be finalized this year

Korea, Canada sign FTA to be finalized this year 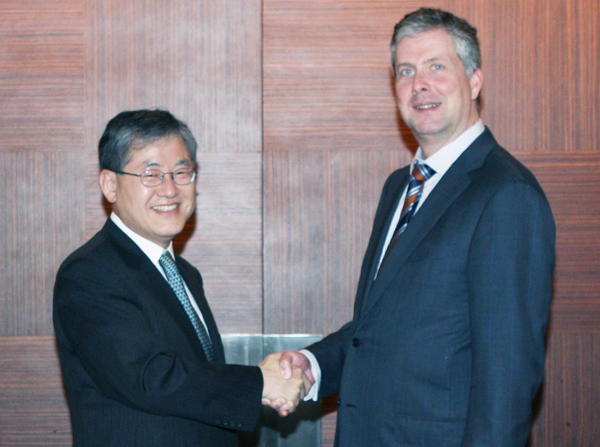 Choi Kyung-lim, deputy trade minister of Korea, and Ian Burney, assistant deputy minister of trade agreements and negotiations at the Canadian Department of Foreign Affairs, celebrate the signing of an FTA at the Shilla Hotel, downtown Seoul, Thursday. Provided by the Trade Ministry

Three months after Korea and Canada reached a deal on a free trade agreement (FTA) in March, the two countries on Thursday signed an initial contract, which will be finalized in the second half of the year.

The FTA was not changed from the original document that was agreed upon in March, the ministry said. The FTA was a culmination of more than eight years of negotiations.

The FTA will be subject to feedback from professionals and the public to minimize translation errors before it is finalized. The agreement will take effect later this year after being ratified by the Korean National Assembly and the Canadian legislature.

The two countries will abolish tariffs on 97.5 percent of imported products.

Canadian beef, which is currently taxed 40 percent in Korea, will be untaxed by 2030. Pork, which has a 22.5 percent tariff, will be tax free in 13 years. About 19 percent of Canadian-produced agricultural products, such as rice, cheese, tangerines and ginseng, will either be excluded from the FTA entirely or it will take 10 years before they are not taxed.

Korean-made automobiles, the country’s best-selling products in Canada, will be sold tariff-free starting in 2017. They account for almost 43 percent of total exports to the country. Tariffs on auto parts will also be lifted by 2017, and tire tariffs by 2019.