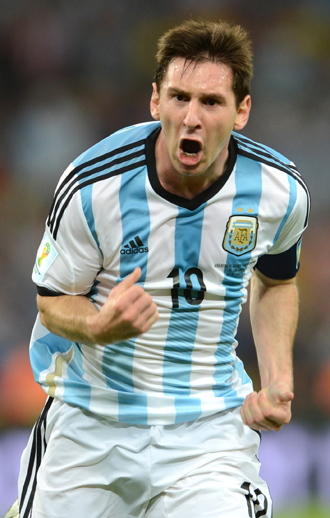 It took Lionel Messi just over an hour in Argentina’s World Cup opener against Bosnia-Herzegovina to show why so many fans consider him the best in the world.

After a frustrating first half, the Argentina captain scored in his trademark style in the 65th minute on Sunday night, completing a quick 1-2 connection to Gonzalo Higuain and running through defenders before striking a brilliant left-footed shot off the post.

The goal - only the second for Messi on football’s biggest stage - set off wild celebrations among the throngs of Argentine fans that had turned the famed Maracana Stadium into a sea of blue and white. It also energized an unimpressive Argentina team that was ahead at that point only because of an early own goal by Bosnia.

Vedad Ibisevic scored a close-in goal in the 85th, but Argentina held on to win 2-1 in the Group F match.

Bosnia got the worst possible start to its first World Cup when Sead Kolasinac scored an own goal after just three minutes.

Messi sent a free kick from the left flank into the penalty area that Marcos Rojo barely touched before the ball bounced off Kolasinac’s foot into Bosnia’s goal.

Bosnia bounced back after the early setback, with Izet Hajrovic slipping through Argentina’s five-man defense but failing to beat goalkeeper Sergio Romero. Five minutes before the break, Senad Lulic tested Romero’s reflexes with a well-timed header on a corner kick.

Meanwhile, there was no sign of Argentina’s vaunted attack, as Bosnia gave Messi no space to work his magic and Sergio Aguero hardly touched the ball.

Coach Alejandro Sabella put in Higuain at halftime, which allowed Messi to take a step back. That shift proved crucial, getting the Barcelona star more involved in the action.

After a string of dangerous runs, Messi combined with Higuain, pulled left along the penalty area, and scored after leaping over defender Ermin Bicakcic without losing speed and balance.

Messi, who has been accused by critics of not playing with as much heart for the national team as he does for Barcelona, pulled on his blue-and-white striped jersey and ran to the sideline before pumping his fist toward the fans. 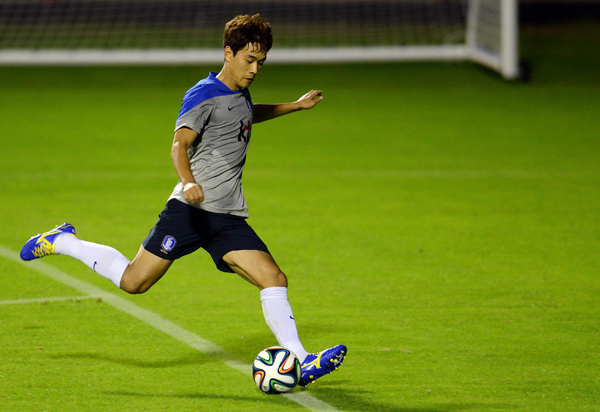 Striker Park Chu-young of the Korean national team works on free kicks as part of his preparation for the Group H match against Russia. [NEWSIS]

Korea also expects its striker Park Chu-young to shine against Russia tomorrow, after he has been focusing on free kicks during training.

Football is one of the most dynamic sports as the 22 players on the field never stop running and the ball constantly rolls over and over on the grass for 90 minutes. But set-piece situations such as free kicks are one of the few moments that break up the game, which may be why many people refer to free kicks as the “aesthetics of a standstill.”

Sometimes a free kick takes the tone of a comma in a sentence but can become a huge exclamation mark because it’s one of the most efficient scoring chances and can instantly turn the tide of a match.

In Korea’s World Cup history, free kicks have been a successful scoring method. The national team has scored a total of 28 goals in World Cups and 12 goals, or 42.8 percent, were made on free kicks. Four of the six goals Korea scored in the 2010 South Africa event were made in set-piece situations - free kicks and corner kicks.

Korean national team Coach Hong Myung-bo wants to see his young Taegeuk Warriors repeat the achievements of the 2010 team and his eyes are on striker Park Chu-young to take the team’s short-range free kicks. 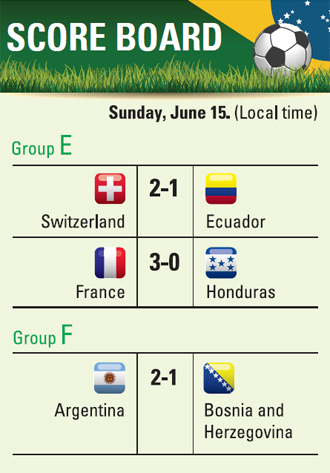 Park didn’t take many free kicks on his club team last season, but he is one of the best free kickers on Hong’s squad.

He has also made pleasant memories on free kicks. He scored against Nigeria in the 2010 World Cup to give Korea a 2-1 lead by striking a free kick into the bottom right corner of the net from the left edge of the penalty box. It wasn’t the game-deciding goal, since the match ended in a 2-2 draw, but it was enough to put Korea through to the second round.

There are many styles of free kicks, but the one preferred by Park is a spin kick, often called a banana kick, which has a similar trajectory to a slider in baseball. A slider is a breaking ball that suddenly curves to the outside corner just before it reaches home plate.

“To a person like me who compares many sports to baseball, it was a perfect slider when he [Park] scored that free kick goal against Nigeria,” designated hitter Lee Ho-jun of the Korea Baseball Organization’s NC Dinos recalled. “If the ball kicked by Park moved like a cut fastball, which breaks less than a slider, it might not have been a goal.”

National team staff said Park has been working hard on his free kicks since he was named part of the squad.

“I’m not the only one who saw Park practicing free kicks alone until late at night and even after training hours,” a member of the coaching staff said. “I’m sure that his free kicks will be a huge hidden weapon for Korea in the match against Russia.”

Instead of putting a spin to the ball, the kicker aims for the center of the ball to make a very strong and accurate kick. Portugal’s captain will scare his opposing goalkeepers just as he does for Real Madrid.

The free kick favored by Zlatan Ibrahimovic of Paris Saint-Germain is a fastball. When he scored against OGC Nice on a free kick in the 2012 season, the speed of the ball was 180 kilometers per hour (111.8 miles per hour), which is faster than Cincinnati Reds closer Aroldis Chapman’s 171 kilometer per hour fastball. But the rocketing fastball won’t be seen in Brazil because Sweden didn’t qualify for the World Cup.