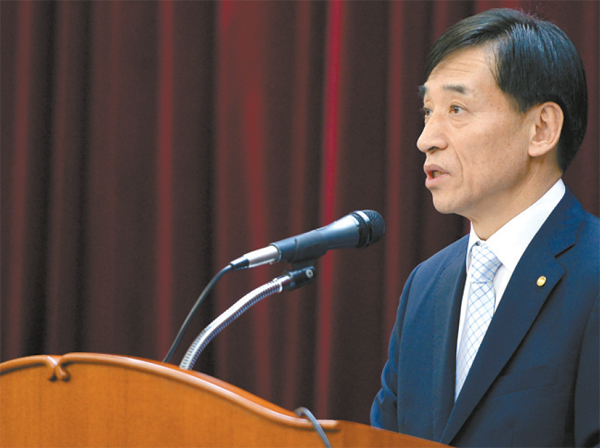 Korea’s central bank chief further dampened expectations for an early increase in interest rates by saying his April comments had not been intended to suggest a hike “so soon as the market took them as indicating.”

Bank of Korea Governor Lee Ju-yeol told reporters at a scheduled dinner on Friday that he did not have any specific timing in mind when he said the next interest rate move would likely be an increase.

His latest comments came as bond prices rallied after Lee, a 35-year career central banker who became the governor in April, softened his assessment of the strength of Asia’s fourth-largest economy at a monthly policy news conference on Thursday.

I have realized that “how my words are interpreted by the market is not always the same as what I intended,” Lee said, while commenting on the bond market’s reaction right after his remarks in April.

“If the market had taken my words [in April] as a blinker for a turn, I may have turned it on too soon,” he said when asked why he denied on Thursday having flagged an interest rate increase within this year.

His remarks made during Friday’s dinner were embargoed until noon Sunday.

The central bank’s latest forecast is for Korea’s economic growth to quicken to 4 percent this year from a 3 percent increase in 2013, but bond traders expect the forecast to be lowered at the BOK’s next scheduled revision July 10.

Lee’s latest remarks could give a further boost to bond prices, which rallied on Thursday and Friday with the benchmark 5-year treasury bond yield shedding 5 basis points to a 1-year closing low of 2.99 percent on Friday.

Analysts surveyed before Thursday’s policy meeting were almost equally divided between this year and next over when the Bank of Korea will start raising interest rates for the first time since June 2011.

The central bank’s monetary policy board held the benchmark interest rate, the seven-day repurchase agreement rate, steady at 2.5 percent for the 13th consecutive month on Thursday in a unanimous vote. Reuters