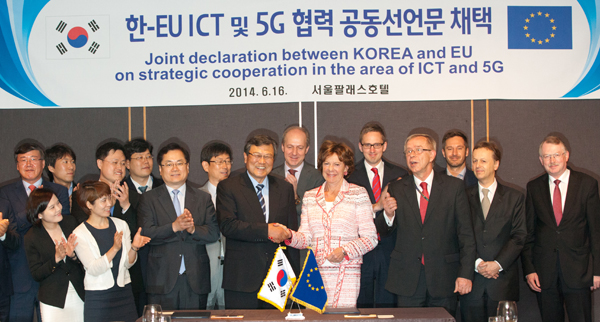 Korean ICT Minister Choi Mun-kee shakes hands with Neelie Kroes, vice president of the European Commission for the Digital Agenda for Europe, at the Palace Hotel in Banpo-dong, southern Seoul. Provided by the ministry

The Ministry of Science, ICT and Future Planning yesterday adopted a joint declaration with the European Union to start developing technologies and policies for the next-generation wireless service, 5G.

According to the declaration, the two sides will launch a joint-funded R&D program in 2016 with the aim to develop 5G wireless network technologies. They will also work together for the standardization of the technologies.

“It is very meaningful to establish cooperation between the two sides in preparation of the era of a superfast 5G network,” Choi said at the ceremony. “Through the cooperation, Korea hopes to develop core 5G technology by 2018 based on the country’s R&D capabilities in ICT and rich experiences in technology commercialization and commercialize the world’s first 5G network service by 2020.”

The ministry says the declaration is a positive sign that the status of Korean ICT technologies has been elevated in the world market, and the joint project will become an opportunity for Korea to take the lead and solidify its position on the global stage.

“The joint research project will become an opportunity to generate synergy between strengths of two sides,” said Oh Sang-jin, director of broadcasting and communications technology at the ICT Ministry. “The European Union was quite passionate when coming up with the declaration and planning future cooperation plans.”

Europe is known to hold technical strengths in core networks - a telecom service provider’s network that facilitates and controls exchange of information between subnetworks - while Korea’s strength is in manufacturing telecom devices, Oh explained.

“The two sides agreed that the network system is significant as the core highway of the whole information distribution system, so we would like to accelerate development of the field through mutual cooperation,” he said.

According to the Korean ministry, the two sides share a belief in the need to accelerate development of 5G technologies that can be commercialized as soon as possible. The European Commission’s Digital Agenda was established as the bloc’s initiative considering those technologies as next-generation profit generators and to offer superfast Internet access to at least half its population, while Korea’s ICT Ministry hopes to commercialize the 5G network, which offers 1,000 times faster networks than LTE.