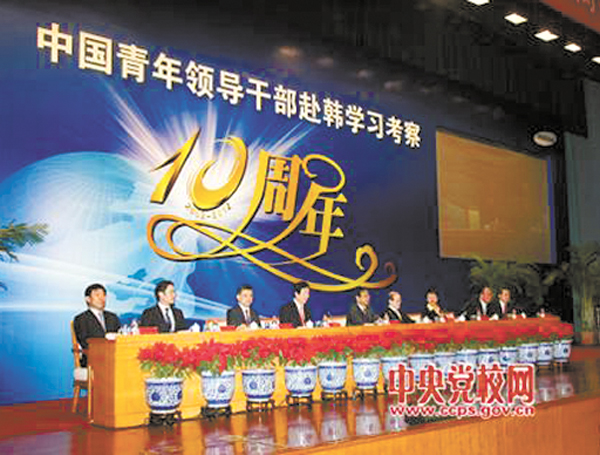 
Two photos and a book associated with a particular family recently were delivered to me around the same time. The pictures sent by the Chinese Institute of the JoongAng Ilbo were of Lee Jae-yong, heir-apparent of the Samsung corporate empire who goes by the name Jay Y. The book was the autobiography of his grandfather and Samsung Group founder Lee Byung-chull, reprinted after 28 years.

One picture of the younger Lee has been carried on the website of the Central Party School of the Chinese Communist Party in charge of grooming senior and middle-rank cadres of party officials. He was hosting a seminar for Chinese leaders on April 26, 2012, an annual event that Samsung Group had been sponsoring for more than 12 years. More than 500 Chinese officials had been invited during those years. Standing next to Lee was Li Jingtian, the executive vice president of the prestigious training institute, and Choi Ji-sung, chief of corporate strategy office and Samsung’s No. 2 man outside the Lee family.

Another picture showed Lee at this year’s Boao Forum for Asia, officially a non-government economic forum but with strong government support from Beijing, which is held annually in China’s Hainan Province. As usual, Lee seated himself in the back row of the conference for regional leaders and corporate executives. In the April event, he took to the podium and announced that Samsung Group was now concentrating investment in the medical field. One of the members of the audience commented that he was articulate and persuasive in his speech.

Jay Y., the only son of Samsung Electronics Chairman Lee Kun-hee, who is still recovering in a hospital after heart surgery, is rarely seen in the media because he has been scrupulous to keep a low-key profile. I thumbed through the autobiography of his grandfather to see if media-shyness runs in the family. His charismatic grandfather was active in many ways. He contributed writings to the Dong A Ilbo in 1984 on exports and technology and to Japan’s Yomiuri Shimbun in the same year on Korea and Japan opening a new era. The following year he appeared on a KBS talk show and frankly talked about his corporate trajectory and vision. In January 1987, 10 months before he died, he contributed to the JoongAng Ilbo a series of columns on national wealth. He was actively involved in society as an elderly man and until his final days.

The society no longer has an obsession with corporate dynasties, which are now in their second or third generations. People describe Chung Mong-koo, chairman of Hyundai Motor Group, as a man of great vision although he may not be an eloquent speaker. We notice him more at overseas motor shows than at home. Koo Bon-moo, chairman of LG Group, is also known to be very insightful in many areas. He is usually portrayed as a hard and unapproachable captain who has shaken up the family-like LG corporate culture.

Corporate investment fell 1.9 percent on year in the first half of 2014. Investment overseas rose 0.8 percentage points, but investment at home lost 0.4 percentage points. Corporate tycoons are increasingly looking outside for opportunities to invest and spend. The strengthening of the Korean won and slow deregulation process may have caused them to look beyond Korea’s borders. But anti-chaebol sentiment may also have sent the overseas-educated younger generation of entrepreneurs, who would naturally have a measure less patriotism than their fathers or grandfathers, to turn their attention outbound for business opportunities.

A society cannot evolve without corporations and vice versa. The hottest stock these days is SK Hynix. Prices of the shares of the world’s second largest memory chipmaker after Samsung Electronics are near their all-time high of 49,600 won ($48.50) last seen on June 19, 1997 when it was Hyundai Electronics. The company outperformed Samsung Electronics’ semiconductor division with last year’s operating profit ratio of 24 percent to sales. The Korean Supreme Court on Feb. 27 confirmed a lower-court ruling sentencing SK Group Chairman Chey Tae-won to a four-year prison term for embezzlement. Chey stepped down from all executive positions in SK affiliates.

As soon as Chey was out of the way, Toshiba announced it will sue for 1 trillion won worth of damages for a wrongful acquisition and use of the company’s technical information. The Japanese electronics company swiftly moved to file a civil suit against SK Hynix just a day after police arrested a former engineer of a Toshiba affiliate on suspicion of leaking technical information to SK Hynix. The company bypassed the customary procedure of taking civil action after a criminal sentence on the same case is delivered. This could hardly be a coincidence.

The estrangement between society and large companies in Korea has reached a worrisome level. Big Business and government should be as distant as possible. But for business and society, the closer the better. It is time we become more tolerant of the corporate sector. But we ask of the corporate families, particularly the younger generation, to reach out first.

* The author is a senior editorial writer of the JoongAng Ilbo.]