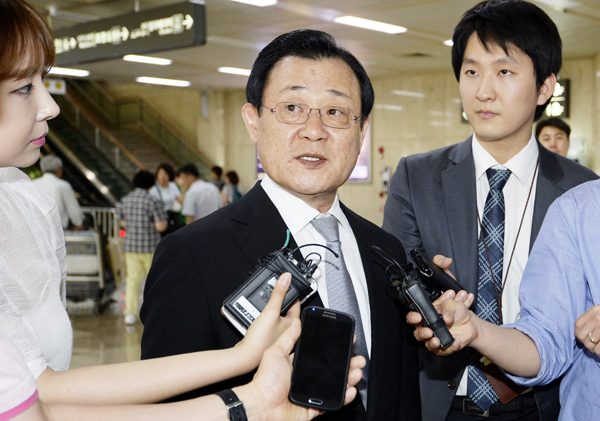 Lee Byung-ki, who was nominated as National Intelligence Service director, answers reporters’ questions this week at Gimpo Airport after returning from Tokyo. [NEWS1]

Lee Byung-ki, who has been nominated as director of the National Intelligence Service, completed his term as ambassador to Japan and returned to Korea on Sunday, and the first words out of his mouth at the airport were controversial.

He didn’t talk about reform of the intelligence agency, political neutrality, enhancement of intelligence capacity or anything related to the NIS operation. “Regardless of motivation or circumstances,” he said. “I have always been sorry to the citizens for the wrongdoings of the past.” He was apologizing for a presidential campaign funding scandal 14 years ago in which he allegedly played a role in delivering illegal funds. “I will explain the situation in detail at the confirmation hearing,”

That means the focus of the hearing will be on revealing his past, rather than on verifying his qualifications and hearing his vision for the future. Between the criticism that would cancel the nomination and the excuses and justification, serious discussion on the current condition and future of the spy agency is likely to be lost.

However, there is so much to do after the new director is appointed. The National Intelligence Service stands at a crossroads. The most serious problem is a crisis of trust. An intelligence agency operates in the shadows to protect the public interest. Therefore, its inner workings should not be entirely in the open. Even jobs that deserve praise should be acknowledged quietly within the organization. But now that so many faults have become known, the agency is criticized for how it has been operating.

If Lee’s nomination is approved, the first and foremost task is to clearly distinguish between what must be kept in the shadows and what can remain in the public eye. In the field of intelligence, various unlawful means can be used. The use of deception against enemies is one of the basic tactics in intelligence gathering. However, the dark art should be used in the shadows only, and trials in the light strictly adhere to the order of law. The organization should be reformed so its executives and field agents will never need to stand trial again.

The morale of the agents also is important. I asked former agents and analysts what the National Intelligence Service needs most, and they all said a morale boost. They are not talking about better benefits or working conditions. They are talking about agents being able to take pride in their work. The most important condition for that to happen is an environment of political neutrality.

A senior asked if I had ever heard of the “yellow envelope” that appears when the administration changes. The yellow envelope was first spotted when President-elect Kim Young-sam carried it to a meeting with President Roh Tae-woo. It contained the key information provided by hidden helpers in the intelligence agency. It likely was related to the vulnerable spots of the preceding administration. Holding the envelope gives the president-elect real influence, and it signals the shift of power. Even if the president’s influence dwindles during his or her term, successors will carry the envelope. It is painful proof that some intelligence officials blatantly court those in power.

The practice was a key motivator for the conduct of some past directors, who repopulated key positions in the organization with their friends and supporters. Officials who were active in the past administration were demoted or pressured to retire.

Some executives who had spent their entire career in the field were sent to military camp and assigned to participate in training for “mental education.” Some were even ordered to write letters of apology and self-reflection. This did not happen during the military regime, but after democratization. Such experiences made the intelligence officials think that they needed to choose a side carefully for the next administration. In order to guarantee political neutrality of the intelligence agency, influence on the personnel affairs should stop.

When the new director is appointed, it should be the first task. If the director ignores law and principles and has the organization take a side with politicians, it is not desirable for the nation and the people. An administration has its term, but there is no time limit on the duty of the intelligence agency.