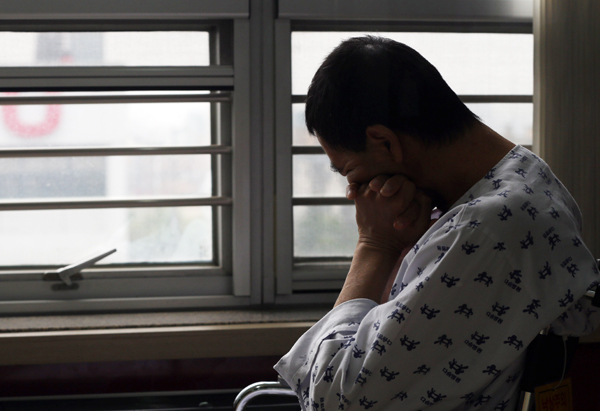 As Korean society rapidly ages, nursing homes have increasingly become the site where many of the elderly spend their final years, and even their last moments.

That was the case for one 88-year-old woman who died in a nursing home in Ansan, Gyeonggi four years ago. No family members were present at the moment of her death, though the nursing home staff notified them of the woman’s deteriorating condition through the district office. The woman, who suffered from dementia, often spoke of how she envied other residents there when they would be visited by their sons and daughters.

“Right before her death, she said she wanted to have some tangerines,” said a nurse at the care center who only gave her family name Lim. “I regret that we couldn’t do that for her.”

As family bonds have weakened, a growing number of frail elders have spent their last remaining time in nursing homes.

In 2012, a total of 36,052 people died in nursing homes, a 60 percent increase compared to that in 2009, according to the Health Insurance Review & Assessment Service.

That number accounts for 18.7 percent of the deaths for those over 65. At the same time, the number of people who die in their own homes has dropped.

Koreans used to consider an elderly relative’s death as a family event that belonged in the home, but over the years that traditional has faded. 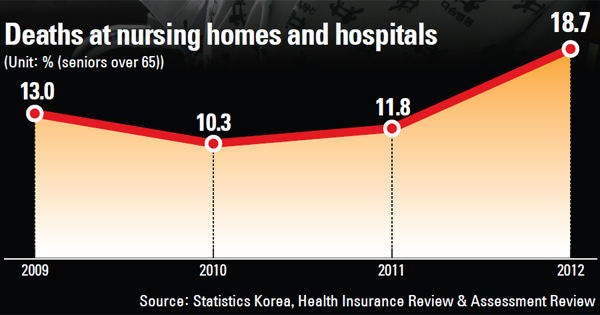 Health professionals and even those who work in nursing homes have expressed concerns over the trend.

“Death in a nursing home is definitely not a good death,” said Heo Dae-seok, a medical oncologist at Seoul National University Hospital.

“People need to feel protected and cared for when they are on the verge of death,” he continued, “but because many people in nursing homes have estranged relationships with their offspring, death feels lonelier.”

But even if family are there, some are too apathetic or busy to handle the commitment.

“As seniors get older, some grown children try to transfer them to a cheaper facility,” said the head of a nursing home in Gyeonggi. “On one occasion, the family members of a nonagenarian only handed us a paper bag that just contained clothing. I feel as though one’s life is treated with little respect.”

Staff pointed out that once the elderly are taken to nursing homes, they will generally not go back to their own houses or their children’s homes.

“Some family will try to shift to a cheaper facility years after,” said the head, “but they rarely bring their parents back to their house.”

Parents in Korea tend to think of sacrifice as one of parental duty. This sentiment partly explains why parents spend an excessive amount of money on their children’s private education.

So it is also natural for seniors to feel abandoned or mistreated when they are taken to a nursing home.

“I bought my son and daughter a house and let them study abroad,” said a 73-year-old man who lives in a nursing home in Bucheon, Gyeonggi, and is treated with hemodialysis. “I also supported their marriages, but all they did was force me into such a place because they think I am a nuisance.”

Ahn Jae-seung, an administrative director at One Love Hyo Hospital in Sejong city, said that adult children generally try to visit as often as possible in the first six months or so.

“But after that, it gradually becomes harder to contact them. They will sometime delay payment for the stay,” he said.

The respondents who favored dying at home said they wanted to spend more time with their families. But not all residents are dissatisfied with the nursing home experience. Some say they feel more comfortable there.

“When I live with my son, I needed to walk on eggshells around him, my daughter in-law and my grandson,” said a 91-year old-woman who has lived in a nursing home for six years now after having spent 45 years at her son’s house.

“I see [my son and daughter-in-law] twice a month, which is good. Here, they offer three meals a day and I don’t need to take care of minor things. So, I feel happier than ever,” she added.

Many nursing home residents have previously been diagnosed with dementia or need assistance for other debilitating conditions, like a stroke, that require constant and intensive care.

“I am one of five sons, but no one has room to take care of [our mother and father],” said a 58-year-old man who took his parents to a nursing home in Yangsan, South Gyeongsang.

“If we are to support them, we would have to quit our jobs. We thought that the facility would provide better care than we could.”