After the World Trade Organization gave the Philippines a waiver for tarification of rice imports until 2017 and increased the tariff rate quota by 2.3 times, Korean experts and farmers’ groups gathered yesterday to urge the government to prepare for the end of Korea’s second WTO waiver this year.

At a public hearing co-hosted by the Ministry of Agriculture, Food and Rural Affairs and the Ministry of Trade, Industry and Energy at the Rural Development Administration headquarters in Uiwang, Gyeonggi, yesterday, both the government and farmers acknowledged that tarrification is unavoidable and agreed on the need for measures to minimize damage to farmers and the industry.

Tarification refers to the conversion of all agricultural nontariff trade barriers into tariffs that have a “ceiling” and to reduce them over time.

For Korea, the current situation is a bit of a dilemma. If the WTO gives another waiver for a few more years, Korea will have a higher tariff rate quota (TRQ) like the Philippines.

TRQs stipulate a level of reducedtariff imports beyond which the tariff rises significantly. 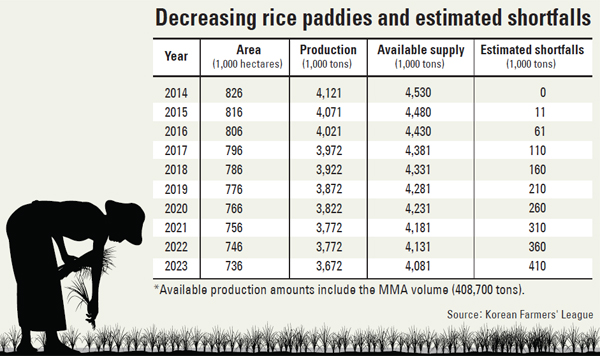 If the WTO doesn’t approve another waiver, tarification will begin next year and more foreign rice will be imported, threatening locally grown rice and farmers’ profits.

The WTO Agreement on Agriculture stipulates an unexceptional tarification principle for all agricultural products of member countries, but Korea was given a 10-year waiver in 1995 and another in 2004. If the WTO rejects a third waiver, tariffs will be reduced next year and more foreign rice will be imported, threatening the profits of local rice farmers.

The country agreed to import the minimum market access (MMA) volume, which is 408,700 tons this year, or about 9 percent of rice consumed (4.5 million tons) last year. The MMA volume has steadily increased from 51,307 tons in 1995.

The Agriculture Ministry said a third extension of the waiver would only increase the MMA amount. 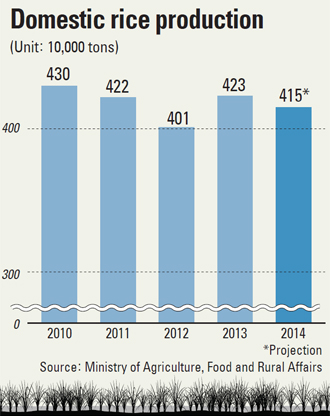 “Given that domestic rice consumption is on the decline, it is burdensome to expand the MMA volume by getting another waiver,” said Kim Kyung-kyu, a senior official on food policy at the ministry. “The government will come up with its own measures to protect farmers’ profits and enhance the industry’s competitiveness.”

Per capita rice consumption has decreased by 1.2 kilograms (2.64 pounds) to 1.6 kilograms every year, according to the ministry.

“In case of tarification, the government will exclude rice from negotiation tables of all FTAs that are planned to be held in order to protect the local market if tariffs on rice get lower in the course of time,” said Park Gun-su, a senior official on trade at the ministry.

The current TRQ for Korea is 8 percent of domestic rice consumption, and 30 percent of the TRQ should be sold for meals.

In the nine effective FTA deals, Korea and its partners excluded rice in recognition of opposition from the farmers to opening the market. Farmers have been complaining that while their production costs rose 25 percent, rice prices climbed only 4.49 percent.

The Korean Advanced Farmers Federation demanded the government keep tariffs for imported rice as high as possible, between 300 percent to 500 percent, and lower the benchmark interest rate for agriculture funds to 1 percent from 3 percent.

On the other hand, the Korean Farmers’ League argued, “While domestic rice consumption is falling, if we open the market, we will lose our food sovereignty and farms will face greater damage.”