For one climber, a trying mission

For one climber, a trying mission 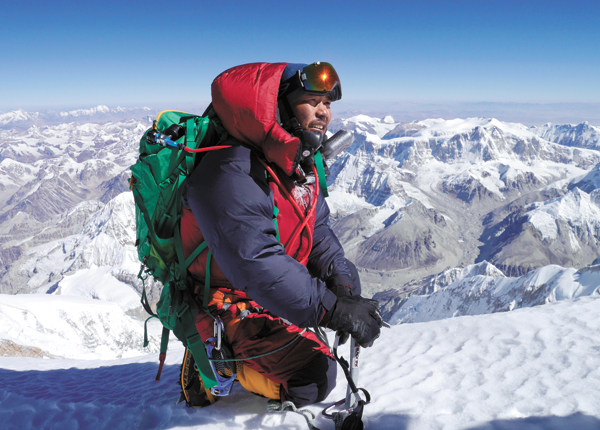 Kim Mi-gon stands on Mount Kanchenjunga, the world’s third-highest mountain, on May 18. Provided by the climber

When professional climber Kim Mi-gon succeeded in his mission of ascending the world’s third-highest mountain at 8,586 meters (28,169 feet) in the southeastern reaches of the Himalayas on May 18, he didn’t feel all that satisfied.

Out of the world’s 14 mountains with elevations higher than 8,000 meters, Mount Kanchenjunga was the 42-year-old climber’s 11th achievement. Nevertheless, a sense of failure stewed inside him as his mind wandered about a kilometer down the peak, where he imagined his fellow climber, Park Young-seok, was hidden under the heavy layers of snow - the spot where he fell to his death last year. Even now, Park remains unaccounted for.

Kim was on a search to find Park’s body but was unable to do so - likely because heavy blizzards and fierce weather had relocated it elsewhere, he said.

Kim took on a similar mission to locate the body of another one of his missing friends in 2011, when he climbed the 8,156-meter Mount Manaslu. That time, his journey had been a success, and he was hoping that luck would carry through in his most recent endeavor. But despite his hopes, his efforts were to no avail.

The JoongAng Ilbo sat down with Kim on May 28 to hear more about the ups and downs of his recent journey.

Q. Do you feel tired after climbing down an 8,568-meter peak?

A. As always, the climb itself isn’t really hard. I’ve returned from the Himalayas, but shed merely two kilograms [4.4 pounds].

Mount Kanchenjunga is notorious for being difficult to climb because of its lengthy route.

You’re right. Of the climbers who reach the peak, 30 percent die while descending, which is why I hurried down. In order to reach the summit, setting up four camps is generally required, but I only set up three. From the fourth camp to the peak, I climbed 400 meters straight forward without using a rope.

How was your expedition trying to find your colleague?

I climb for fun, but things like this just really pull my spirits down. I feel regretful having failed to find him. He wasn’t there when I arrived at the spot where he fell last year. After setting up the fourth camp, I tried searching for him four times but came back empty-handed. I think he was swept downhill by the snow. I returned to the base camp, called his family first thing and told them I was sorry.

It sounds so strenuous, having to climb and search simultaneously.

My plan was to find Park’s body, drop it off at the third camp [7,000 meters] and climb back up to the summit. But his body was not in the area where he fell last year [around 7,500 meters], so I returned to the fourth camp [7,400 meters] and drank a cup of tea. I continued my climb around 6 p.m. and reached the peak at 8:15 a.m. the following morning. And then I came straight back down to the base camp [finishing the entire mission at 7:30 p.m. that night].

Don’t you think you were a bit reckless to climb for 35 consecutive hours?

It’s better to reach the summit in the early morning because delaying time on the mountains can get dangerous. I wasn’t even sleepy except the moment right before arriving at the peak. In order to save time, I departed from the original route at 8,500 meters and climbed straight up. The Sherpas covering my back said I was crazy, but I was confident.

Thirty-three people have already climbed all of the world’s 14 peaks that are higher than 8,000 meters. Do you think the fame that entails finishing the mission has paled in significance?

[Winning publicity] isn’t my goal. Climbing is my hobby and it is what thrills me the most, and climbing the 14 peaks is just a means to go to the mountains. Even after [I complete that mission], I’m going to continue climbing.

Does your family ever try to stop you from climbing?

It often breaks my heart when my 11-year-old son asks me what “crevasse” and “disappearance” mean. I try not to think about my family as much as possible when I’m in the mountains. I can’t be vulnerable [or distracted]; I need to be cool-headed.