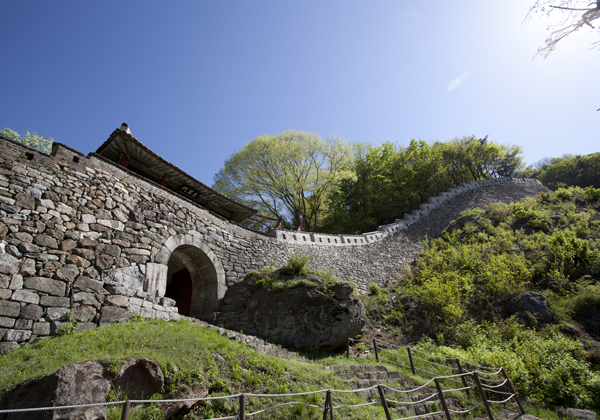 Namhansanseong, also known as the Namhan Mountain Fortress, was inscribed on Unesco’s World Heritage List yesterday in Doha, Qatar. Pictured above is the East Gate of the fortress. Korea now has 11 cultural properties inscribed on the list. Provided by Gyeonggi Cultural Foundation

The decision was announced during the 38th World Heritage Committee in Doha, Qatar, making it Korea’s 11th cultural property on the register.

“The committee appreciated that the fortress illustrates the evolution of the Korean military’s construction techniques, which include elements from China and Japan, in its attempt to protect the country from the eventual use of more Western-style weaponry in the early 17th century,” the Cultural Heritage Administration (CHA) said in a release.

“It shows how the craftsmanship in the construction of the fortress improved from the seventh century to the 19th century, as well as the changes in weaponry.”

The fortress, situated in Gyeonggi, on the southeastern outskirts of Seoul, is a unique structure, located on a plateau at an elevation of 500 meters (1,640 feet).

Its geographic position helped the nation protect itself from foreign forces attempting to attack the capital city of Hanyang, which is now modern-day Seoul, during the Joseon Dynasty (1392-1910). Although some records allude to the fortress’s existence in the seventh century during the Silla Dynasty (57 BC-AD 935), it was renovated to its current form in 1624 during the Joseon era.

“Because the structure has been developed over the centuries, it not only shows the different techniques used in each era, but also the influence in [construction] skills and culture among nearby countries, including China and Japan,” said Choi Jae-heon, a geography professor at Konkuk University.

During the Second Manchu Invasion of Korea in 1636, King Injo took refuge in Namhansanseong, hiding out there for nearly two months and in that time developing a sort of miniature royal palace within the fortress. Local experts pointed out that such an element is unique and believe this feature likely contributed to the site’s recommendation for inscription in April by the International Council on Monuments and Sites, a consulting body to the Unesco committee.

The Gyeonggi Provincial Government said it plans to develop a hiking trail to attract more visitors to the ancient site and hire a professional historian to provide explanations to visitors on the structure’s development and its current form.

“Because the committee recommended regulating any excessive development near the area and encouraging local residents to participate in preserving and managing the heritage, we will work with related local governments and other groups to set up systematic measures to protect and promote the country’s cultural asset,” CHA said.

In conjunction with the Educational Broadcasting System (EBS), the administration produced a documentary on the historical and cultural ramifications of the fortress, which will air today and tomorrow at 9:30 p.m.