Move on, but never forget

Move on, but never forget 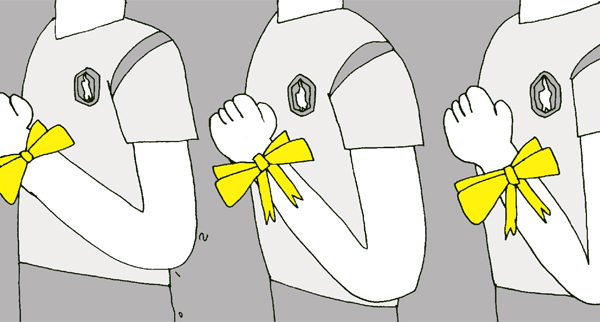 The crowds were smaller than the last World Cup, but still wearing the trademark red “Korea Fighting” regalia. Some had camped out since 10 p.m. the previous night to claim a good spot to watch Korea’s match against Russia the next morning on the Jumbotron in Gwanghwamun. A 1-1 tie, however, was all that could be mustered against the weaker Russian team.

Just a few blocks away from the throngs of screaming Koreans on Wednesday morning, thousands of yellow ribbons fluttered in the morning breeze in memory of the victims of the Sewol ferry tragedy. And on television the day before, the trial of the Sewol ferry crew alternated with stories of the impending match with the Russians. But the broadcaster’s excitement about the match was subdued.

Does the less-than-ecstatic mood represent Korea’s expectations for its World Cup team? Or do Koreans feel guilty about celebrating this year? Should they continue to engage in bouts of self-flagellation over the ferry tragedy? There is a sense that Koreans cannot fully throw themselves into the frenzy reminiscent of the 2002 World Cup, when a sprawling sea of red in front of City Hall created one of the iconic moments in modern Korean nationalism. Perhaps the players on the Korean team subliminally could not will themselves to win against the Russians. A loss would have been unacceptable. But to celebrate a win would have been awkward and even selfish given the dark mood that still pervades the country.

Undeniably, there were many mistakes in the Sewol tragedy from the ferry crew to the Blue House. But a process is under way to deal with the wrongdoers, a search continues for the ferry company owner and the government is undertaking a massive restructuring not unlike the changes that took place within the U.S. government after the Sept. 11 attacks. Tragedies like the Sewol exposed weaknesses in the Korean system. But Koreans have demonstrated an uncanny ability to learn from their mistakes. The liquidity crisis in 1997, for example, exposed major problems with ROK business and the economy.

But aggressive adjustments were made to stabilize, restructure and modernize business practices such that Korea was one of the few major economies not to suffer a recession in the last financial crisis. Between 1970 and 2000, Korean airliners had one of the poorest safety records of major carriers, losing nearly 16 passenger and cargo planes and killing hundreds of people. But they adjusted with better training, stricter regulations and embedding English-speaking non-Korean pilots in the cockpit to avoid cultural pathologies that might have contributed to bad decision-making.

I believe that Korea will undergo major reform in domestic safety and crisis response as a result of the Sewol. Though it will take time, Korea will be a safer place in the long term because of the terrible fate that befell those students.

The faces of those young children will never be forgotten. A yellow ribbon will always have special meaning for Koreans. The thousands that flutter quietly in the wind in front of City Hall, along the Cheonggye Stream and in front of office buildings will be constant reminders for Koreans to keep their promise to make their country a safer place. The ribbons should never be taken down.

But the country has to move on. The World Cup provides an opportunity to cheer for “Korea Fighting.” The world wants to see a confident and ambitious Korea, albeit one that is more compassionate and sensitive. When the team plays this weekend, Koreans should revel in the patriotic mania reminiscent of 2002 with giant flags being passed among the crowd, fireworks and collective joy. The team should wear yellow wristbands and dedicate this World Cup tournament to the fallen souls of the Sewol. Rather than feeling guilty about cheering, Koreans should cheer without guilt. It is the only way to live on, but to never forget.

* The author is professor at Georgetown University and senior adviser at the Center for Strategic and International Studies (CSIS) in Washington, D.C.