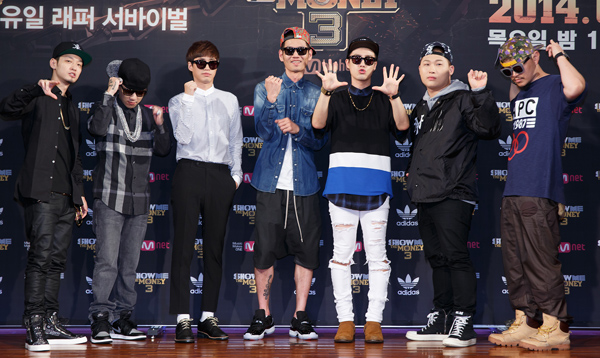 Show Me the Money

The biggest hip-hop competition show Mnet’s “Show Me the Money” is back with new celebrity “coaches.” Starting with Tablo of Epik High, Dok2, The Quiett, San E, Masta Wu, Swings and singer-rapper Yang Dong-geun will team up to discover the hidden talents of underground MCs of Korea’s hip-hop scene.

Yesterday, at a press conference held in Yeouido, western Seoul, producer Han Dong-chul told local media that he is expecting a lot from the new coaches.

“Well, this is not the first time that we got the call from the production team,” said rapper The Quiett, who has been very active in the local hip-hop world under the music label Illionaire Records. “But as M.net convinced me over and over, I could sense their eagerness to promote hip-hop through the televised competition,” explained the 29-year-old MC.

Launched in summer 2012, “Show Me the Money” was produced to raise awareness of hip-hop music, which has long been marginalized by the mainstream pop industry. In its first season, Kwon Hyuk-woo aka “Loco” snatched the grand prize. This year, his latest single “Hold Me Tight” topped major online music charts.

Some of the contestants for the upcoming season include YG Entertainment’s teenage rappers B.I. and Bobby.
The first episode will be aired on July 3.