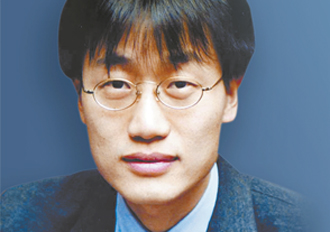 Lee Hae-jin, the chairman of Naver and NHN Corporation, is often referred to as a legend of the start-up scene, but he has also been described as a hermit.

The chairman has only voiced his opinion in public twice since establishing Naver.com in June 1999.

Lee spoke once in 2001, when announcing that Hangame would become a paid service, and once more at a ceremony celebrating the 300 millionth Japanese user of Line, his company’s mobile messenger, last year.

But yesterday, Lee delivered a whole lecture. At the 2014 SME Leaders Forum at the Jeju Lotte Hotel on Jeju Island yesterday, he gave an address to 500 CEOs of small and medium enterprises.

“As a person who founded the search portal Naver, I have a sense of duty and fulfillment in contributing to connecting information [content] providers and the people who find this information through search,” Lee began in his speech yesterday during the conference’s afternoon session.

“I believe that focusing on our core businesses faithfully, while managing the company, was the key to survival in a fierce competition with global giants,” said Lee.

The chairman also stressed the effectiveness of using online search to the CEOs, who were mostly in their 50s or older.

“Search advertising is a vital information tool that connects people who wish to purchase goods with the people who want to be informed about their products,” he continued. “Compared to other marketing activities, the cost is cheaper and the operation is simple, so it is effective for SMEs.”

While SMEs have limited marketing tools and commercial areas where they can sell products in as compared with large corporations, using the Internet is a useful way for them to overcome those limits, Lee explained.

Lee also asked the SME leaders to actively use his company’s new products: Mobile Farm, a free app that can be used to create a mobile site, Store Farm, an online sales site without commission fees, and Naver Works, which provides an online office suite.

Only when the lecture was nearing the end did Lee bring up his main topic.

“I would like to help Korea’s content to expand into the world someday and hope that many global hidden champions will emerge through our online platform,” Lee said

The online platform Lee refers to is Naver’s mobile messenger Line. Lee said that Line, which is three years old, had attracted 470 million users worldwide as of Monday.

The number surpasses the 450 million users of WhatsApp, the mobile messenger owned by Facebook.

In the United States and Mexico, Line users exceed 10 million. Early this year, JP Morgan said that Line is the only messenger that could compete with WhatsApp in South America.

Thanks to the robust growth of the messenger, Naver’s overseas sales for the first quarter doubled to account for 28 percent of its entire sales. Due to these factors, the chairman’s expectations for Line are getting bigger, which was demonstrated when he appeared at a celebratory event for Line last November after 12 years of silence.

Some industry observers also note that Lee’s sudden presence in public is because Naver is nervous about the recent merger of the nation’s No. 1 mobile messenger operator Kakao Corporation and the No. 2 search portal company Daum Communications.

But Hong Jong-gil, a researcher at Korea Investment and Securities, said that Lee put his focus overseas when the domestic search market slowed down in the late 2000s.

“As Line is now showing its performance, Lee gained the self-confidence to speak publicly,” said Hong.