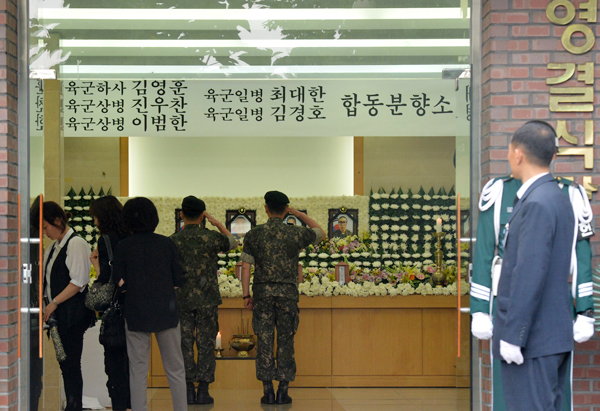 The volunteer military system is a controversial issue, one of the taboo subjects in Korean society. In addition to security issues and the financial burden, opponents call it “a leftist conspiracy to weaken Korea’s military strength” and argue only the poor would join the military. In the last presidential election, Kim Du-kwan proposed allowing young Koreans to pursue their dreams without postponement by introducing a volunteer military, but his idea didn’t get much attention.

However, the guard outpost (GOP) shooting spree a few days ago made think again about the possibility of a volunteer military system.

I spoke with Byun Yang-kyun, who had served as minister of planning and budget in the Roh Moo-hyun administration. “Is the volunteer military system still the answer?” He agreed that it is. President Roh was always skeptical of the draft system, going so far as to say that young men were wasting their time in the military.

First, hundreds of thousands of jobs are created. Second, specialization and professionalization of the military makes it more elite and technologically advanced. Third, there is less cost to society to maintain the armed forces. Fourth, exhausting debates about evasion of military service, religious objections to military service and additional points for military service would be moot. As it stands, all these issues remain controversial.

“The GOP shooting incident is a structural problem. Our soldiers have been treated like pigs. How can we let them live in the same room? They are not inmates. Military service is not imprisonment. It is no way of middle-class living. The military should offer living conditions on par with average citizens. Who would want to join the military?” he asked. “The barracks should be renovated so soldiers can have private sleeping quarters.”

But is this a matter of facility investment, unrelated to the volunteer system?

“The volunteer military system will change the military into a good workplace. Just as people choose to become a policeman or a fireman, being a serviceman is a career choice. And it has to offer good facilities, benefits and wages.”

Byun also believes a volunteer military is the best way to win over North Korea. “With a draft system, when North Korea has 100 men dig with a shovel, we do the same. But with a volunteer military system, we can have one man dig with a single excavator. Why do we need to man the GOP with soldiers?” he asks. “Thermal infrared cameras and closed-circuit televisions can detect the movements of a squirrel. That’s what a technologically advanced elite force can do. It is the secret of 180,000 U.S. forces defeating the Iraqi army of 1.2 million troops.”

He continued to praise the volunteer military system. It would boost employment and entrepreneurship of young Koreans and energize the creative economy. Also, gender equality in employment would be achieved, and GDP and the employment rate would improve. When 650,000 troops are reduced to 300,000, it translates into 35 trillion won ($34.46 billion) more in GDP. Why are we not discussing the volunteer military system publicly when it has all those benefits? He mentioned two obstacles.

“The first is the socially fixed idea. The draft system is like a curfew in the military regime. People have come to believe it is fair and safe. Once we break it, we will realize that individual liberty and interests expand. Second, there are internal oppositions within the military. When the number of soldiers decreases, then number of generals has to be reduced. Introducing a volunteer military system is not possible without resolving the insecurity of the generals.”

In Korea, a soldier commits suicide every four days. As many as 20 percent of the soldiers are “in need of special attention.” The remaining 80 percent are in charge of taking care of the fellow soldiers in need of special attention. This condition of the ROK Forces is pathetic. Reforming the military is a task as grave as national reinvention. That’s why we need to discuss the controversial topic of a volunteer military system.

If we don’t bring it up now, it will be forgotten. The fuss will die away, and the families of the victims will have to live with the pain forever. And the incident will be forgotten just like the Sewol ferry tragedy.