Korea a natural for pharma-tech convergence

Korea a natural for pharma-tech convergence 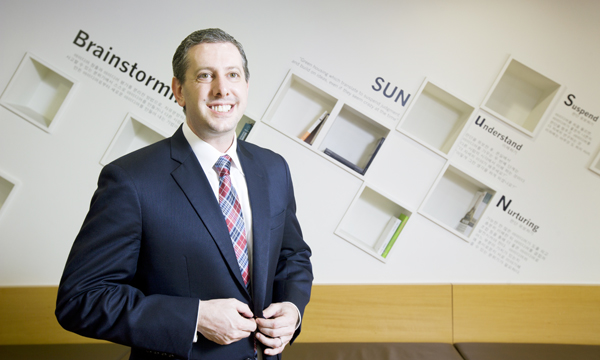 Brian Gladsden, president of Novartis Korea, inside the brainstorming room where employees discuss creative ideas and solutions at the pharmaceutical company’s office building in Namdaemun-ro, central Seoul. By Park Sang-moon

Brian Gladsden, president of Novartis Korea, believes there is a good opportunity for a multinational pharmaceutical company like his to collaborate with Korean technology players to bring better results to patients.

“Dialogue and projects have already started and are ongoing in this area [at Novartis Korea],” said Gladsden in an interview with the Korea JoongAng Daily earlier this month. “There’s a real good opportunity to think bigger and to focus not just on some smaller individual projects, but on larger collaborative opportunities with the goal of changing patient outcomes for the better.”

Although no discussions or tangible results have been made public by Novartis Korea, collaboration between healthcare solution companies and the technology sector is being highlighted globally.

The United States and countries in Europe also are interested and their governments are eyeing the healthcare-technology industry as having high growth potential.

“Silicon Valley is very active,” said Gladsden. “In Europe, there are search consortiums that are very strong coming out from Switzerland and Germany.”

During the interview, Gladsden also spoke about recent Novartis deals with other pharmaceutical companies that aim to strengthen the company’s core capability.

Q. How is Korea perceived by Novartis headquarters in Switzerland?

A. From a global perspective, Korea is always considered a key or critical country. This is the 12th largest pharmaceutical market in the world, depending on what research you’re looking at. That alone shows it’s a priority because of its size. And then when you dig a little bit deeper, the fact that Korea is so present in clinical trials, particularly in the Asian region, is incredibly important. Korea is the third-largest pharmaceutical market in Asia after Japan and China. Clearly, it’s seen as having real potential, both commercially and from a research and development perspective. That said, the challenges are also clearly there. The challenges that we look at as an industry here is how to realize the great opportunity, the great potential that we see in this market and this country. If we look at it from an R&D perspective, there’s great innovation coming out of this country, a huge desire to grow in the biopharmaceutical sector and from a health technology space. That’s where we’re starting to see the great core competency in Korean technology - in nano and mobile - and how this can improve healthcare worldwide has not gone unrecognized by our global organization or headquarters. That’s what I plan to focus on in my time here in Korea.

Talking about health-technology collaboration, do you have any specific goals in mind on how you are going to create synergy between the two industries?

Dialogue and projects have already started and are ongoing in this area. But I think there’s a real good opportunity to think bigger ... of larger collaborative opportunities with the goal of changing patient outcomes for the better. The way I envision it comes down to bringing the right people [from medicine and technology] around the table … Basically, each one brings its core competency to see how we can come together to find a better solution for patients. This can come in the form of diagnosis, monitoring and even lifestyle tracking. Another area I think where the future is happening now, which presents a real win-win-win [for society and government, patient and company] is in focusing on the right drug for the right patient at the right time.

Are there any particular technology companies Novartis has in mind or is working with?

Let’s just say my vision would be that after a couple of years we’ll be able to talk about a great collaboration that Novartis has with local technology companies and to come up with a great product that will improve patient outcomes … It may be in the form of major player here or it could also be in the form of a smaller company that might have a very unique technology that we haven’t seen. It’s a matter of maintaining the internal focus, the core competence that we have in R&D, but then having an open network of partnerships.

From left to right: Brian Gladsden, third from right in front row, poses with industry officials inside a meeting room at the St. Mary’s Hospital in Banpo-dong, southern Seoul, in May. Novartis Korea signed a memorandum of understanding with the hospital to cooperate in clinical research; Gladsden, sixth from right in the front row, with experts from Switzerland and Korea at the Swiss-Korean Life Science Symposium in May at the Grand Hyatt Hotel in central Seoul; Gladsden paints a wall last month with his employees as part of volunteer work in Hongeun-dong, northern Seoul. About 300 employees participated in the Novartis Community Partnership Day. Provided by the company

Why specifically Korea though?

I’m looking at this where together we can export this, where we can grow this to a global scale and change the world in this sense. It sounds a bit visionary and big picture, but basically that’s the way we need to think. Innovation in technology is happening everywhere in the world, but something unique here is the proven track record of this country [that] is amazing. Just having been here six months now, I can tell you it’s a fascinating history and I’m impressed with what has been accomplished here over the past 50 years. When something is said, it will get done. It gets done more than any place I’ve ever seen. That is something very unique. The competitive spirit here is amazing. There are huge technology players here with major global scale that also have the desire to compete in the [global] space. And when you take the know-how of Novartis in this area and combine it with the capabilities here, then you can make a big difference.

Globally, Novartis announced some business deals with GlaxoSmithKline (GSK) and Lilly. Although details haven’t been disclosed, how could such deals affect Novartis’ Korean business?

The benefits that will come out of this in Korea are very much aligned with the benefits globally. Novartis clearly had once focused on areas where we believe we either are or will be a global leader, basically to have the greatest impact, and that’s the baseline for this deal. Bringing in GSK’s oncology portfolio [helps] to build upon our oncology portfolio and potentially our pipeline as well. When we look at vaccines and animal healthcare, where we are divesting these [to Lilly], that will provide an opportunity for a true global leader to be formed. The same thing with the joint venture in OTC [over-the-counter drug business]. The joint venture - the consumer healthcare business between GSK and Novartis together - will be of much greater scale and potential to be a world leader than either of us alone.

Do you anticipate or expect similar deals happening between Novartis and Korean pharmaceutical companies?

I would say this is one area where I’m very open to opportunities. This doesn’t mean that I’m searching for major M&A deals in Korea - I want to be clear on that. But we already have quite a few promotion deals, for example, on some of our key brands with some local companies. But I think that as local companies are increasing their R&D focus on innovative products, I think this could provide more potential for future R&D partnerships moving forward. This is something that’s not just beneficial for Novartis, it’s also one of the key goals of the government. President Park Geun-hye talks about a creative economy and wants to grow Korean companies. We’re very supportive of that. We’re very supportive of the growth and capabilities of Korean industry as well. We’re always open to opportunities that would be a win-win for both local and multinational companies, which also supports the government’s vision, as well.

What is your business philosophy?

It’s different from other businesses in that there’s a lot of complexity in the pharmaceutical business because it’s such a highly regulated business that’s also involved in peoples’ health. With this in mind, [when talking about] my business philosophy and why I do what I do, I try to simplify as much as possible to the core, which is that we’re in the business of saving lives and improving patient lives. That’s it … I tell everybody in the organization that when we make our decisions on what we’re going to do in our business, the first question that we have to have in mind and ask ourselves is how this will help patients. If the answer is “It won’t,” then I say we won’t do it. If the answer is “I don’t know,” then I say let’s figure out that question and discuss it again because everything that we do should ultimately help patients because that is good for our business.

Finally, how would you define good leadership?

Quite simply, the job of a leader is to provide a purpose, a vision for why we do what we do and where we are going. So everybody has a common goal, a common purpose and vision in mind. And then [a good leader should] bring the team together, bring out the best in each individual. Ultimately, if a leader is able to do that, you will be successful as an organization. If people come to work every day and don’t understand the purpose or don’t understand why they are doing what they’re doing or what the end goal is, then people won’t be inspired. 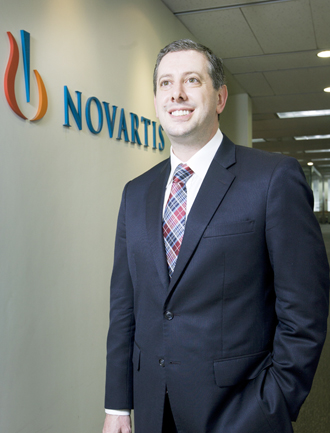