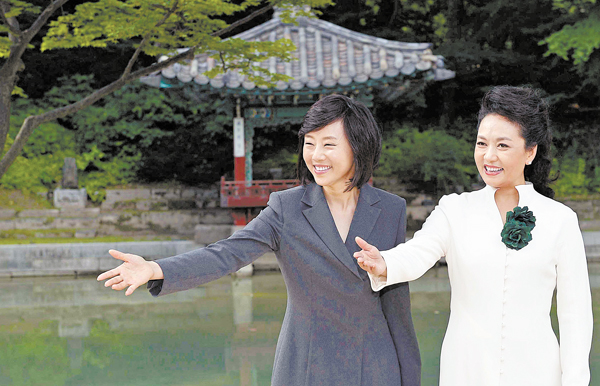 After arriving at Seongnam Air Base by a private jet with Xi, Peng was welcomed by a series of high-ranking South Korean government officials, including Foreign Minister Yun Byung-se, Korean Ambassador to China Kwon Young-se, and Cho Yoon-sun, senior presidential secretary for political affairs.

Known as a fashionista, with glamorous taste in clothes, accessories and hand bags, her dress code during the couple’s two-day trip to Seoul has attracted a huge amount of attention from the Korean media.

Upon her arrival there, she was presented with flowers by two young Korean girls.

Accompanied by Cho and other officials, Peng listened to her guide’s explanations about the architectural characteristics of the palace and even asked a few questions.

According to the Blue House, Peng told Seoul officials that the palace was a place in which the past and the present were in perfect harmony.

“This garden is really a wide and great place. This is very clean and beautiful,” the first lady told Secretary Cho, as quoted by the Blue House.

Peng also had the opportunity to enjoy a Gayageum performance at the palace, which was arranged by the South Korean government. A gayageum is a type of traditional Korean string instrument, perhaps one of the most well-known.

According to Cho, Peng told her that the palace reminded her of popular Korean dramas, namely “Dae Jang Geum (Jewel in the Palace)” and “My Love From the Star.”

“It feels like I’m in the ‘Dae JangGeum’ scenes,” Peng said upon mentioning “Jewel in the Palace,” which depicts the successes of a young kitchen cook during the Joseon Dynasty who works in the king’s palace.

On the recent popularity of Korean dramas in China, Peng added, “It is a good thing that young people in both countries like dramas [from Korea and China] and understand each other’s cultures.”

Since Xi Jinping was elected as China’s president in March 2013, Peng has emerged as an icon of “soft power,” often accompanying her husband on state visits abroad.

Starting with Xi’s official visit to Russia, she also accompanied him on his trip to Trinidad and Tobago, where she performed one of her hit songs together with local musicians.

And when U.S. first lady Michelle Obama visited China in March, Peng had a long conversation with Mrs. Obama in fluent English.

The Chinese first lady has gained a reputation for her diplomatic activities as well as for her active participation in public campaigns, including her role as a goodwill ambassador for the World Health Organization focusing on AIDS and tuberculosis prevention in China. In 2008, Peng also assisted with restoration work in Sichuan, China, which was ravaged by an earthquake, and held a free music concert to benefit the victims.

In 2013, she was ranked by Forbes magazine as one of the world’s most powerful women.