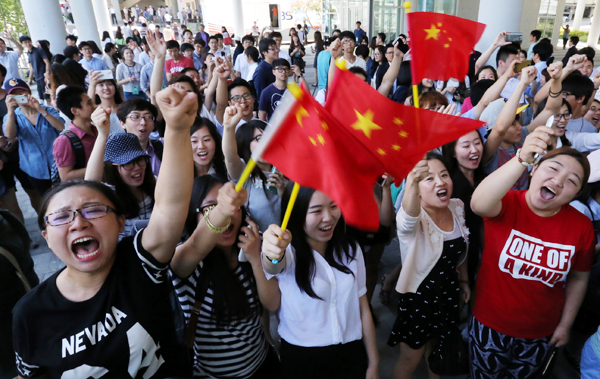 Chinese students studying at Seoul National University hail Chinese President Xi Jinping with cheers yesterday as Xi prepares to leave the campus after giving a speech on the second day of his visit to South Korea. [Joint Press Corps]

Although South Korean President Park Geun-hye and Chinese President Xi Jinping declared a “mature strategic cooperative partnership” between their two countries following their two-day summit, Seoul analysts pointed out that there were big gaps in the topics they addressed in their public statements - big enough to be referred to as the elephants in the room.

Of course, those issues are so sensitive they wouldn’t necessarily be addressed publicly, analysts said, especially since their summit was being closely watched by North Korea, the United States and Japan.

The two leaders were so aware of the attention being paid to their bilateral talks, analysts claimed, that the summit was like a virtual multilateral meeting with the United States and North Korea.

Ahead of the meeting, Washington and Pyongyang took great pains to show their disgruntlement. North Korea launched a string of short-range projectiles, angry that Xi was going to Seoul before he visited Pyongyang. Although the regime, a longtime ally of China, also showed a conciliatory tone on June 30.

China appeared to be conscious of the North’s anxieties, analysts said. Xi cut his visit to Seoul from three days to two, and did not directly criticize North Korea’s nuclear weapons program while in South Korea.

Washington was also peeved with Seoul. According to Kyodo News, Caroline Atkinson, the deputy national security adviser for international economics, expressed U.S. concerns about Korea being part of the Asia Infrastructure Investment Bank (AIIB) project in a meeting with a senior Korean government official in the United States earlier this month. The AIIB is a China-led initiative that excludes the United States and Japan.

The U.S. government says China is highly likely to use the bank for political purposes, and if Korea joins, its credibility as a U.S. ally might be affected, Kyodo said.

Possibly as a result, South Korea did not show clear support for China’s regional initiatives during the summit, including the AIIB, the Regional Comprehensive Economic Partnership (RCEP) or cooperation in regional defense.

So Seoul was looking over its shoulder at Washington during the summit, and China was doing the same vis-a-vis Pyongyang.

Another elephant that didn’t get mentioned in Park and Xi’s summit statements was the increasing militarism of Japan and its deliberate distortions of its historical misdeeds.

Last year, Park and Xi signed “a joint statement on a future vision for Seoul-Beijing” ties at their first summit in Beijing, in which they “expressed concerns about the unstable situation with deepening confrontation and distrust among regional countries due to history and other relevant problems,” which was an obvious shot at Tokyo.

But this time around, they said little about Japan, only vowing in the joint statement to develop a mutual study of women forced to be sex slaves for the Japanese military during World War II.

The core reason for the silence, analysts say, was because South Korea didn’t want to disturb the trilateral cooperation among Seoul, Washington and Tokyo needed to rein in North Korea.

However, China’s CCTV reported Thursday that the two leaders agreed to hold a joint ceremony next year to mark the 70th anniversary of the liberation of Korea from Japan’s colonial rule and China’s victory in fighting the Japanese. CCTV added the agreement was not supposed to be released to the media, and it wasn’t released to the Korean media.

Tokyo was obviously concerned about Seoul and Beijing getting closer, and it showed it by reaching out to Pyongyang right before the summit. Japanese Prime Minister Shinzo Abe announced July 4 that his government will lift some of its unilateral sanctions on Pyongyang in return for North Korea setting up a committee to reinvestigate the fate of Japanese abductees.

Park and Xi also mulled over cooperation in regional defense, pledging to “maintain the current tendency of the satisfactory development of defensive and military relations so far” and hold high-level foreign and defense talks regularly.

However, they did not explicitly specify any sensitive defense issues, such as China’s unilateral declaring of an air defense identification zone (ADIZ), which overlaps Korea’s own.

That was apparently because of the Seoul-Washington alliance. Gen. Curtis Scaparrotti, commander of U.S. Forces Korea, has been urging Seoul to deploy the Terminal High Altitude Area Defense (Thaad) missile defense system, which China is guaranteed to oppose.

Xi appeared to be understanding of the issues involving the alliance between South Korea and the United States, analysts said.

“This summit was an important litmus test for China to judge whether South Korea could be included in its plan to implement new regional initiatives,” said Kim Heung-gyu, a diplomacy studies professor at the Ajou University.