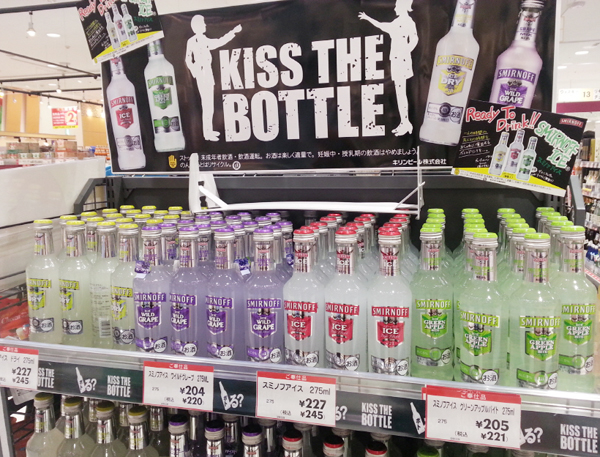 TOKYO - When strolling down one of the aisles at Ito Yokado, Tokyo’s largest supermarket, it isn’t difficult to find shelves stacked with ready-to-drink (RTD) cocktails in bottles and cans. And it’s easy to spot many consumers - young and old - leaving the store with a variety of drinks with low alcohol content ranging from green apple to wild grape flavors. Industry sources note the RTD cocktail market in Japan is significantly bigger than in Korea, and according to International Wine & Spirit Research, volume increased more than 10 percent last year from 2012, which is in contrast to declining sales of beer and vodka.

Diageo Korea, the local arm of global liquor company Diageo, aims to grab a share of the growing RTD cocktail market in Japan by exporting drinks produced at its facility in Icheon, Gyeonggi. Starting this month, the company is exporting Smirnoff Ice Green Apple and plans to expand the selection of drinks for export. RTD cocktails are especially popular in the summer and are made by mixing vodka - Smirnoff for Diageo drinks -with soda and fruit flavors.

“Japan’s RTD [cocktail] industry has grown and is growing, which means a lot of potential for us,” said Cho Kil-soo, managing director of Diageo North Asia, which includes Korea. “Unlike Korea, where much alcohol is consumed outside [at restaurants and bars], drinking at home is prevalent in Japan.”

Cho’s comments were made at a press conference in Tokyo with Korean reporters to commemorate Cho’s anniversary as managing director and share the company’s plans.

Ahead of the move to export Smirnoff drinks to Japan, Diageo Korea last year invested 5 billion won ($4.95 million) to expand production at its Icheon facility. By exporting to Japan, Diageo Korea expects sales in fiscal year 2015 to reach $15 million, which is five times the sales from July 31, 2013, to June 30.

Cho explained that in a market where consumers prefer to drink at home, drinks with low alcohol content like RTD cocktails (normally 5 to 6.5 percent alcohol) are popular. In addition, there are different flavors for consumers to choose from for a light drink in the evening with family and friends.

“Prospects for the RTD industry in Korea also are bright because there is a growing number of single-member households,” Cho said.

In recent years, whiskey companies like Diageo have promoted cocktails made with their products to compensate for shrinking demand for high-end liquors in Korea. Data from the Korea Alcohol & Liquor Industry Association shows that last year, 1.9 million boxes of a dozen 700-milliter bottles of whiskey were sold in the country, compared to 2.7 million boxes in 2010.

“Exporting RTDs to Japan shows how important a role Diageo Korea plays globally for Diageo,” he said. “We plan to sell RTD products manufactured at our Icheon facility in both Korea and Japan, and in doing that, find new growth opportunities.”

Cho also shared his business plans for the 2015 fiscal year. “Last year, we focused on pushing for internal and external innovation for steady growth,” he said. “This year, we plan to put out efforts to become a trusted company that leads the alcohol culture based on innovative changes.”

“Innovation, particularly in the products we make, will be the key for us in this new fiscal year,” Cho said.