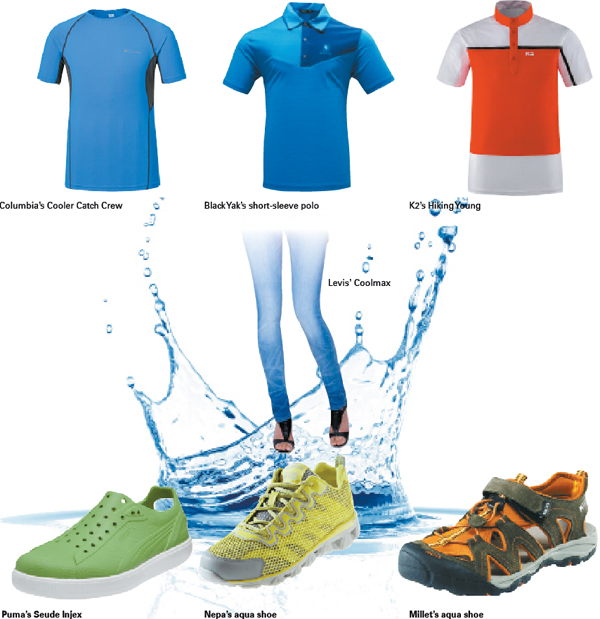 The outdoor and sports industry is in a heated competition with fashion products, with a focus on shoes that promise a cool summer. The biggest reason companies are putting all their bets on summer sales is because of worse than expected business in winter and spring.

Typically, outdoor and sports fashion companies sales rise during the winter seasons thanks to brisk sales of coats. But this year, the Korean winter was milder than usual. Furthermore, the industry was expecting a sales bump in spring, especially with extensive holidays at the beginning of May.

With Labor Day (May 5) on a Thursday and Children’s Day and Buddha’s birthday the following Monday and Tuesday, many office workers signed up for a vacation day on Friday for six consecutive days off, and some companies closed down on Friday.

However, retailers’ high expectations quickly turned to disappointment after the Sewol ferry tragedy, which that claimed the lives of more than 300 passengers and crew in mid-April. As the country mourned the deaths of young high school students, consumers hesitated to make purchases.

“Usually, we consider summer as an off-season for us and in earlier years it would be a time for us to take a breather,” says an outdoor company official, who requested anonymity. “But now we’re in a desperate situation.”

This is why companies are rolling out hybrid shoes and fashion clothing that are more expensive than the usual summer fashion, but incorporate other functions using new materials.

This year the most heated competition among outdoor and sports fashion companies involves aqua shoes.

Designs have changed from the earlier flimsy-looking shoes and now resemble running or trekking shoes. Today’s aqua shoes can be worn when going to water parks, streams or the beach and are comfortable and good looking enough to be worn as everyday shoes. They can come in quite handy during the rainy season.

“This year’s trend in aqua shoes is toward multiple functions, so people can not only use them as aqua sandals, but also for walking and even driving,” says Kim Nara, head of the shoe development team at outdoor fashion company K2.

“They have to be practical so they can serve as an aqua leisure sports shoe, inner city sports shoe and rainy season fashion,” says Lee Byeong-gil, head of the product planning team at Isenberg.

Industry experts expect hybrid aqua shoes to replace the rain boots that have gained wide popularity among female consumers in recent years. This is particularly so as the boots lose their usefulness when the rain stops they tend to cause feet to smell.

“[Aqua shoes] can even prevent slipping in areas when walking into a pool of water in the city,” says Lee Yong-joon, head of the product planning team at The Redface.

Lee explains that the aqua shoes being rolled out this year come with enhanced safety features and versatility. As a result, they are more expensive.

Merrell’s Waterpro Maipo aqua shoe looks similar to a trekking shoe. It has a solid sole that can squeeze out water quickly. The price tag on the shoe is 119,000 won ($118).

That’s nearly 10 times more expensive than the cheapest aqua shoes that sell for less than 10,000 won.

Millet’s aqua sandals that sell for 125,000 won use three materials to release water and keep the soles drier. The toe area is covered with a rubber-like material that helps protect the foot.

K2’s aqua shoe, which retails for 129,000 won is designed with a flexible heel that can be folded. This is so they can easily be slipped on and off when entering or leaving a tent.

Center Pole, another outdoor brand, has an aqua shoe that can be put on while the heel is folded. The shoe is priced at 99,000 won.

Eider introduced two aqua shoes: one at 149,000 won and the other at 139,000 won. The more expensive shoes are designed to resemble a running shoe and has 42 holes for water to exit on its sole, in-between the toes and on the sides.

It is also made with a light reflective material that makes the wearer more visible during evening activity.

The cheaper model is intended for use as everyday footwear and was designed to look like a walking shoe.

The Columbia aqua shoe that sells for 138,000 won is designed to keep the feet cool.

Kantukan offers the cheapest aqua shoes among outdoor brands. Shaped like a sandal, they retail for 39,500 won. Another model that resembles a trekking shoe sells for 55,000 won. It has holes from the upper side to the sole to dissipate water.

The Redface’s aqua shoe Sky Sandal is sold at 79,000 won and has tiny intersecting wires in the drainage holes that keep out tiny rocks and other small objects.

Isenberg’s 149,000 won aqua shoes have small holes on the side of their soles that improve traction.

Sports brands also are jumping in with more elaborate designs and shoes that can be used for running as well.

Puma sells a 59,000 won aqua shoe based on its classic Puma Suede sneaker, popular since 1960. There are holes on the top of the toe box, and it is manufactured with a highly elastic material that makes it lighter than other high-end aqua shoes.

Fila released a 99,000 won shoe that has an elastic and flexible sole much like a running shoe. Kswiss also released a 79,000 won aqua shoe with a sole that is 3.5 centimeters (1.4 inches) thick to make the wearer appear taller.

This summer, outdoor and sports fashion brands also are competing in technical materials that are lightweight and breathable.

Columbia is selling a 58,000 won “cooler catch” crew T-shirt that uses proprietary “Omni-freeze Zero” material that reacts to moisture and sweat to keep the wearer cool.

Merrill has increased the line of products that use its M-Select fabric to more than 20 percent of all its clothing products compared to last year. Its zip T-shirt retails at 99,000 won and uses materials developed by Columbia and Japan’s Toray.

Lecaf’s 43,000 won T-shirt uses fabric developed in-house, which the company says has a unique structure that allows the material to have wider surface contact and absorb more body heat.

Fever Green offers a 169,000 won trekking T-shirt for men and a 149,000 won one for women that has intersecting wire designs on the side running down from the arm that not only increases cooling but absorb body odor.

Some of the products use materials in which those wearing them can check their body temperature visually. Eider’s 70,000 won T-shirt has an ice shaped thermometer that changes color as body heat rises.

Their other cooling functions using a variety of designs.

Adidas’ T-shirt retails for 39,000 won to 59,000 won and has aluminum cooling dots on the back to keep it fresh during workouts.

Renoma Sports uses a beeswax-shaped designs that prevent the fabric from sticking to the body. Shorts retail for between 148,000 won and 168,000 won.

The same unique cooling materials are even used in jeans.