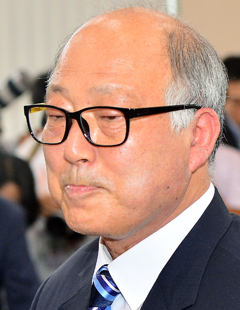 The nominee for minister of education came under tough questioning about plagiarism allegations at his confirmation hearing yesterday, and defended himself by saying customs in academia were different at the time.

Kim Myung-soo, President Park Geun-hye’s pick to become education minister and deputy prime minister for education, culture and society, was accused of directly copying some works of his students in theses written for promotion as a professor at the Korea National University of Education.

Kim said yesterday that lawmakers need to understand the circumstances and the culture of academia at the time.

“I apologize for the controversy surrounding plagiarism,” Kim said, “but I think that all of the allegations are a bit exaggerated and don’t take into consideration the academic culture at the time.”

Members of the main opposition New Politics Alliance for Democracy yesterday brought charts showing that portions of Kim’s theses were exactly the same as one of his student’s work. Kim didn’t credit the student in his theses.

“Two independent theses are required to be promoted at the Korea National University of Education,” said Representative Yoo Eun-hae of the NPAD.

“But eight pages in one of his works are identical to a graduation dissertation of a student who was once advised by him,” Yoo said.

The representative alleged last month that all four theses submitted by Kim for a professorial promotion at the university had content that had been copied directly from other dissertations without proper citations.

When asked about his definition of plagiarism, Kim answered that it is “the act of copying specific terms or new words without proper citation.”

Representative Cho Jeong-sik of the NPAD countered that Kim’s definition was grossly misleading.

“According to the guidelines issued by the Education Ministry, plagiarism constitutes the act of using other authors’ ideas or phrases without citations,” Cho said. “This is exactly what you have done.”

Kim later admitted that his definition required elaboration, but didn’t specify in what way.

Another controversy involved the order of the names of the authors on one of the theses. Kim’s critics said he put his own name as the first author and a student’s name second, even though most of the work was done by the student.

At the hearing, Kim said that the student insisted on putting Kim’s name first.

“I kept insisting that my name be moved behind,” Kim said. “But the student said that my name should appear first.”

Kim was on the defensive even for members of the ruling Saenuri Party.

“I read through the controversial theses,” said Representative Lee Sang-il of the Saenuri Party.

“I could find identical numbers and phrases in your dissertations and your students’. It’s a hard sell if you insist that’s not plagiarism.”

When asked how his education policy jibes with the philosophy of the president, Kim said, “I will pursue an education system that will fill the classroom with happiness and dreams.”

When Lee asked about specific measures he had in mind, Kim couldn’t answer.

Lee Wan-koo, the floor leader of the ruling Saenuri Party, earlier hinted at his disapproval of Kim in a radio interview. “If the plagiarism issue is confirmed at the confirmation hearing, Kim won’t be able to pass,” he said.