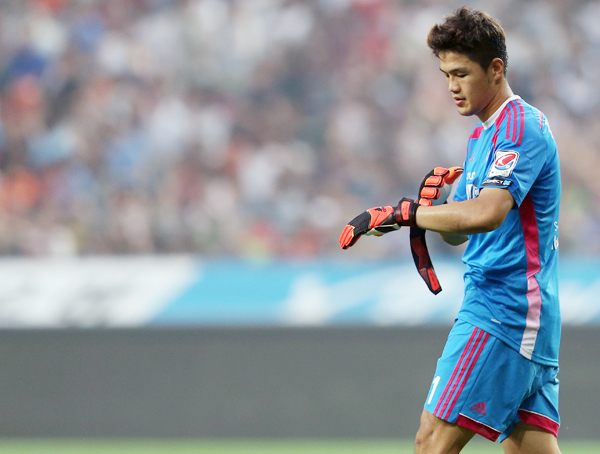 Korean national football team goalkeeper Jung Sung-ryong was strongly criticized by fans and analysts for his disappointing performance during the 2014 Brazil World Cup.

Jung allowed five goals in Korea’s first two Group H matches against Russia and Algeria, but fans were angry about more than just this. They were frustrated as he frequently struggled to clear the ball in the goal area and because his reaction speed was slow. It also seemed like the world’s biggest football stage was too much for him - Jung looked totally terrified on the field.

Besides all the criticism, people in the football industry, including incumbent and former coaches, were worried about Jung, saying that the 28-year-old, who had been the country’s No. 1 goalkeeper in previous international events such as the 2010 South Africa World Cup and the 2012 London Olympics, might not be back in his best shape because of a potential loss of confidence on the field.

But it looks like Jung, the Suwon Samsung Bluewings goalkeeper, is shaking the worries off much faster than expected. In Saturday’s K-League Classic match against his team’s biggest rival, FC Seoul, which was designated as the “Super Match” of the week by the league, he proved to fans that they have nothing to worry about. His performance was excellent, even though he couldn’t stop his team losing, 2-0.

At the Seoul World Cup Stadium, FC Seoul’s home, the Bluewings spent most of their time defending FC Seoul’s brutal attacks, which came from everywhere on the field because of the Bluewings’ sloppy defense. But Jung protected his team from bloodshed with six saves.

In the 71st minute, Jung aggressively challenged Seoul’s forward, Sergio Escudero, in a one-on-one situation and saved the team from conceding a goal. He then also blocked two shots attempted by forward Mauricio Molina and defender Lee Woong-hee in the 79th and 80th minutes. He also punched the ball out of the goal area when forward Yoon Joo-tae fired a shot right before the match ended.

The two goals he allowed - one to midfielder Kim Jin-kyu in a set-piece situation and the other to forward Yoon in the 94th minute - were unavoidable.

During the match, Jung not only had to fight FC Seoul, he also had to deal with his own issues. He knew that the nation was criticizing him for his poor performance in Brazil, and some aggressive FC Seoul fans tried to provoke him by holding up mocking signs, one of which read “Fyah~!”

Jung tweeted the word during his return flight to Seoul from Brazil to inform his Twitter followers that he is fine. Some fans comforted the goalkeeper, but many criticized him, saying that it seems like he doesn’t feel any responsibility for the losses.

“Every time I touched and kicked the ball, I heard many FC Seoul fans exclaiming ‘fyah’, but I considered it an encouragement,” Jung said after Saturday’s match. “I just decided to show my best on the field.”

Jung said he tried to get rid of all the bad memories from Brazil by spending more time working on his skills. Since his return, he has gone through a series of intense training sessions with the team’s goalkeeper coach, Shin Bum-cheol, every day.

He also went through basic drills for one to two hours every morning and afternoon and then tried to develop more muscle to improve his reaction speed to the ball.

“The coach and I communicated a lot to shake off the World Cup, and it’s obviously helped me,” Jung explained.

He said that many football players also offered him encouragement. Goalkeeper Kim Byung-ji, a member of the 2002 Korea-Japan World Cup squad, whom Jung considers to be a mentor of his, said, “You have done everything you could in the World Cup, so don’t waste your time blaming yourself and try to focus on the football that you will have in the future for yourself and your family.”

Jung said, “I think I owe many things to fans and the best way I can pay them back for all the support is to perform my best on the field.”