At British Open, Grand Slam gets away from Park

At British Open, Grand Slam gets away from Park 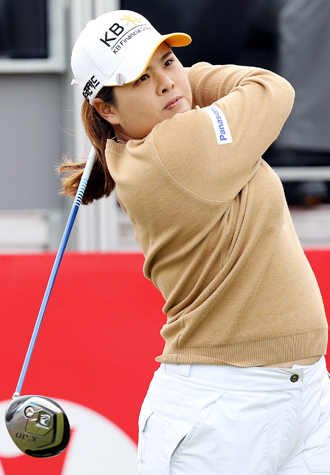 Park In-bee tees off to start the final round of Women’s British Open on Sunday. [AP/NEWSIS]

Park In-bee failed to accomplish the grand slam - winning the LPGA’s four major events - as was unable to stay under par in the final round of the British Open.

She missed a 12-foot birdie putt on the 17th, then put her tee shot in the right rough on the easy 18th hole and wound up with a bogey for a 77.

Mo Martin knew she hit her 3-wood exactly how she wanted on the 18th hole at Royal Birkdale.

With the ball slightly below her feet, just under 240 yards away and a strong wind at her back, she let it rip and watched the ball track toward the flag. Martin thought it was short. Then she thought it might be too long. Moments later, she knew just how good it was. “I could hear it hit the pin from the fairway,’’ Martin said. “That was a pretty fun feeling.’’

The ball rolled into the center of the flagstick and settled six feet away for an eagle, and when no one could catch her, the 31-year-old American became a major champion Sunday at the Ricoh Women’s British Open.

“I think I still need to be pinched,” Martin said after closing with an even-par 72 for a one-shot victory over Shanshan Feng of China and Suzann Pettersen of Norway.

It was Martin’s first eagle of the year. She had not won on the LPGA Tour in 63 previous tries. And on a wind-swept Sunday when no one broke par, she was never closer than two shots to the lead the entire final round.

The best shot of her life changed everything. “When it was in the air, I said, ‘Sit.’ And then I said, ‘Stop.’ And then when it was going toward the hole, I said, ‘OK, I don’t have anything more to say to that ball.’ I actually heard it hit the pin. It’s definitely one to remember.’’

An hour later, it turned out to be the winning shot when Feng and Park of South Korea couldn’t stay under par.

Both needed one birdie over the two par-5 closing holes at Royal Birkdale. Feng missed birdie putts of 15 and 10 feet and shot 75.

It was a disappointment for Park, trying to become the seventh woman to capture four of the LPGA’s majors. She had a two-shot lead at the turn until the high grass grabbed the bottom of her wedge on the 10th, sending her to a double bogey. She fell out of the lead by going long on the 14th for bogey, and never caught up.

“Made a lot of mistakes that I really didn’t need to make,’’ Park said. “Obviously the last hole drive was really disappointing.’’