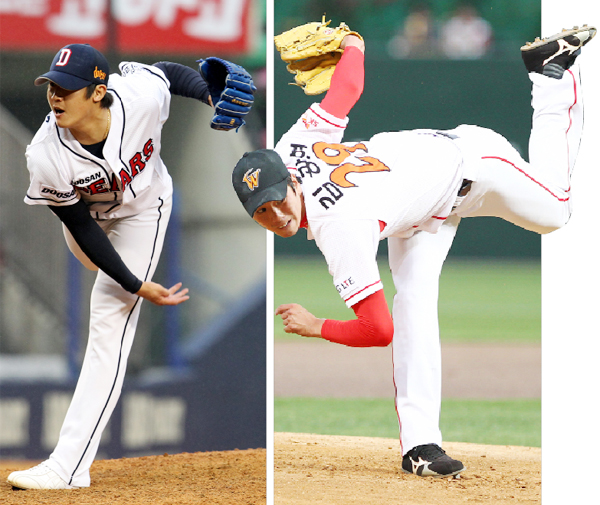 Lee Yong-chan, left, was respectable in the closer role for the Doosan Bears before being suspended for 10 games for a drug violation, while Kim Kwang-hyun has been the only bright spot for the eighth-placed SK Wyverns. [Ilgan Sports]

The Doosan Bears were considered a strong challenger to the defending champion Samsung Lions, but last season’s runner-up faces a tough road to the 2014 postseason as their starting rotation has been awful. The LG Twins made it to the postseason in 2013 for the first time in 11 years, and they have been a surprise again this season, struggling in the second tier of the league despite fielding nearly the same lineup as last year. And after leading the league in spending in the offseason, the Hanwha Eagles are mired in last place.

Last week, Pickoffs looked into each of the top four clubs, and this week the fifth through ninth teams are under the microscope. All records and statistics are as of Monday.

The Bears were predicted to compete for first place this year after losing to the Lions in seven games in the 2013 Korean Series. They addressed their biggest problem last year by designating the closer role to Lee Yong-chan, who returned to the roster after recovering from an injury. Lee was a respectable 3-3 with 10 saves and a 3.65 ERA, but the 25-year-old was handed a 10-game suspension by the KBO earlier this month for illegal drug use.

Doosan’s biggest problem this year has been the starting rotation. New U.S. import Chris Volstad (5-7/6.21 ERA), who was expected to lead the staff along with ace Dustin Nippert, was designated for assignment earlier this week, and the third and fourth starters - Noh Kyung-eun (3-9/8.50 ERA) and last year’s Cinderella Yoo Hee-gwan (7-5/5.08 ERA) - have performed like they are pitchers for a home run derby. If they can’t improve their 5.76 team ERA, the fourth worst among the nine teams, the Bears will have a better chance of getting to the Moon than to the postseason.

The Tigers were predicted to be better this year with an improved starting rotation of Yang Hyun-jong, D.J. Houlton, Kim Jin-woo and Song Eun-beom. But Kim was sidelined to start the season after getting hit in his leg during the preseason, and Song (3-4/7.50 ERA), who was expected to have a monster season after an impressive preseason, has been a disappointment.

Unlike other clubs, the Tigers signed a closer as one of their two foreign pitchers. But Jairo Asencio (2-0/15 saves/4.46 ERA) has struggled with control and the rest of the bullpen has been a real headache for Manager Sun Dong-yeol. Just like the Bears, they need to improve on their 6.00 ERA, the second worst in the league, to have any hope of a postseason appearance. Since Kim has returned, the question is how the starting rotation will line up with six candidates for the spots.

It is strange that this team is in seventh place with most of their key players back from last season. Their 4.90 team ERA isn’t great, but it’s good enough for fourth in the league. Surprisingly, the Twins are worst in the league in hitting with a .279 team batting average. The Twins were third in the league in hitting last year with a .282 team average and fourth in scoring with 616 runs. In the offseason, they imported Josh Bell, who led the league with eight homers through April but then was designated for assignment after being unable to handle a steady diet of breaking balls. For the Twins to make an encore postseason appearance, new foreign hitter Brad Snyder needs to perform like Bell did in April in the middle of the lineup and veterans like Lee Byung-kyu (.250/35 games) must stay healthy.

It’s hard to see a path to the postseason for Manager Lee Man-soo’s team. Starter Jo-Jo Reyes was designated for assignment after a disappointing record (2-7/6.55 ERA), foreign starter Ross Wolf (1-2/5.54 ERA) is expected to take the closer role in the second half, even though his agent opposes the move. Whether he likes the job or not, he’ll soon find himself packing his luggage if he can’t impress Lee in the bullpen. The only bright spot on this team’s dismal pitching staff (5.78 ERA/third-worst ERA in the league) is lefty ace Kim Kwang-hyun (9-6/3.49 ERA), who is likely to bolt for Major League Baseball next season. MLB veteran Luke Scott, who was expected to lead the team’s offense in the middle of the lineup, has appeared in only 33 games due to a series of minor injuries and is hitting .267 with six homers.

Writing more than 100 words about this middle-school-level team is a waste of ink and paper. The Eagles need to study how the Samsung Lions and Bears developed the league’s best farm systems. Spending big money on just one or two players in the free-agent market will never make them strong. Another suggestion is to fire 73-year-old Manger Kim Euong-yong, who still thinks throwing a chair against the walls in the dugout can motivate players in the 21st century. Their .284 team batting average is eighth in the KBO to go with a league-worst staff ERA of 6.25.