The end of ‘Made in Japan’?

The end of ‘Made in Japan’? 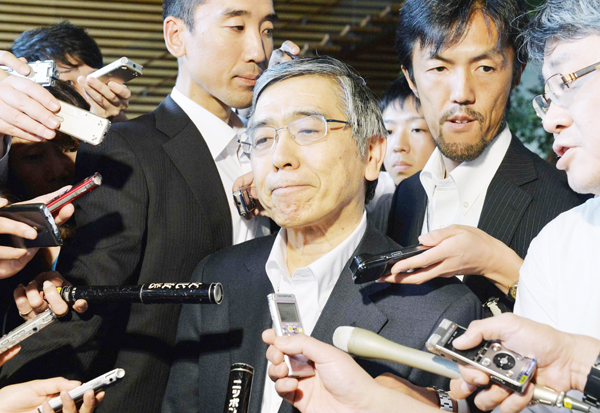 Historical comparisons can admittedly be facile. But given the bleak turn Japanese economic data has taken, I can’t help but be reminded of the downturn in 1997, the last time Tokyo raised sales taxes.

A huge drop in machinery orders - the biggest on record - is yet another reminder Japanese executives remain reluctant to invest their massive cash reserves or raise wages. Even more ominously, M2 money supply growth is now in negative territory. Such measures should be surging 14 months after the Bank of Japan unleashed history’s biggest monetary bonanza. Instead the tepid 3 percent rise in M2 last month put Japan’s money supply in the red in real terms, a clear sign BOJ Governor Haruhiko Kuroda’s bond-buying spree has lost potency.

“The reality is this: so far, the spending retrenchment in April-May tracks fairly closely the retrenchment seen in 1997,” says Richard Katz, publisher of the New York-based Oriental Economist Report.

Economists are clamoring for another jolt of monetary audacity after Prime Minister Shinzo Abe’s ill-advised sales tax increase in April. Clearly, the sugar high from the BOJ’s April 2013 move to double bond purchases has worn off. Yet the BOJ is expected to keep policy unchanged at its July 14-15 meeting.

“The BOJ’s inaction risks turning the quantitative-easing program from a qualified success into a failure,” says Adam Slater, senior economist at Oxford Economics in London. “Now, the danger is increasing that this will instead be a tardy response to a significant deterioration in economic conditions.”

All along, the hope was that Kuroda’s yen-printing spree would get corporate Japan to deploy its $2.3 trillion cash stockpile in ways that would quicken growth and spur inflation. The 19.5 percent plunge in machinery orders in May from April underscores the degree to which that’s not happening.

The weakness of Japan’s credit dynamics is equally perplexing because it comes as inflation-adjusted interest rates drop. The problem, Slater points out, is that a “continued aversion to debt among firms and households may be blunting the effectiveness of this channel.” In other words, two decades after Japan’s giant asset bubble burst, the private sector is still too traumatized to respond to the BOJ’s actions. It’s costing Kuroda the so-called multiplier effect that, in normal times, makes monetary policy such a powerful policy lever.

There’s another reason Kuroda needs to make an even bigger commitment to his QE experiment: the nature of inflation the economy is getting. With its 48 nuclear power plants idled for safety reasons and the yen down 20 percent, Japan is ending deflation via energy imports - not confidence among companies to up retail prices. When Abe declares an end to deflation, as he did in a June 24 Bloomberg News interview, it’s more fudge than reality.

Energy-related price increases mean than if the economy slows sharply, 1997-style, Japan risks stagflation - hardly an improvement over where it’s been since the early 1990s. It’s worth noting, too, that in the same month Abe hiked taxes, wages excluding overtime and bonuses fell for a 23rd month.

Granted, Kuroda is trying to be creative. One idea being considered: buying exchange-traded funds based on the new JPX-Nikkei Index 400, a stock measure created to boost investment in Japanese companies that provide higher returns on equity. The hope is that BOJ support would strengthen the argument for greater capital expenditures.

But all the yen in the world won’t restore Japan to vibrancy unless executives and workers believe that this time, things really are different. That requires Abe to stop the cheerleading and do his part to deregulate the economy. Only by moving decisively to lower trade tariffs, loosen labor markets, encourage innovation, diversify corporate boardrooms and empower women can Abe generate true confidence. Otherwise, Abenomics will be remembered more for squandering opportunities than creating them.