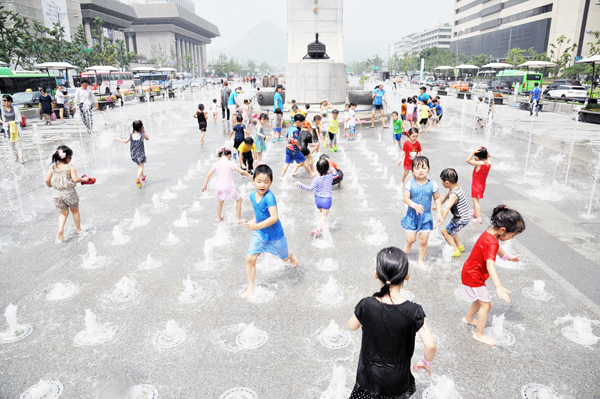 On a bright Tuesday afternoon, Yeouido’s Mulbit Square was full of mothers and their children, despite the scorching heat, all there for its ground fountain.

Among the crowd was Park Se-hee, 38, and her 5-year-old Hyewon. As Park rubbed sunblock on her daughter’s arms, the water from the fountain began to well up.

Hyewon immediately ran towards the geysers along with the other children.

“I can spend three to four hours with the kids here if I take a pair of clothes and a towel,” Park said. “It is the best amusement facility, and I don’t have to pay a penny.”

Jang Hye-su, 34, and her 5-year-old son Jun-ho were also visiting the park that day. Jun-ho ran around joyfully shooting water guns. Jang scolded him once when he drank the fountain water, but she admitted that she liked coming here because it is a safe place.

Over the past few years, ground fountains like the one in Yeouido’s Mulbit Square have become major play areas for youngsters during the summer months, with their numbers increasing from 325 in 2011, to 570 last year, with more than 100 ground fountains being built annually.

That shift has led to a change in the intended use of such structures. Ground fountains were originally built for aesthetic purposes when the first was introduced in 1997 in front of the Samsung Life Insurance building in Jung District, central Seoul. 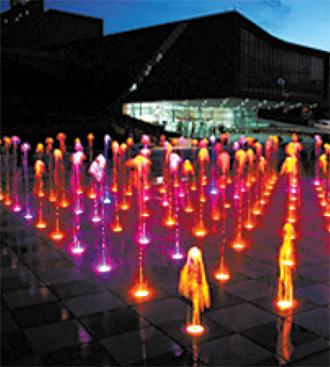 Jumping Fond of the Dream Forest, in Gangbuk District, northern Seoul, lights up at evening

But since 2000, most ground fountains have simply turned into playgrounds for children.

“The one in Constellation Park in Sangam-dong, [western Seoul], built in 2002, was the first that served as a playground,” said an official with the Seoul Metropolitan Government.

In Seoul, 71.1 percent of all recreational water facilities are ground fountains, according to the city government. Children obviously prefer them, but parents do, too, particularly because they are free, and they don’t have to worry about their children drowning, like in open pools, or getting hurt.

With their added popularity, some of apartment complexes have also begun constructing their own fountains.

“We built one because many parents with little kids wanted it and we had some money carried over from previous months,” said Shin Gyeong-mi, a representative for the residents of Raemian Apartment Complex in Dongjak District, southwestern Seoul.

Some fountains have specific targets in mind, mostly toddlers under age 4. Though a few amusement parks have built structures for the babies, who are too small to play with older children. The Seoul Children’s Grand Park, for instance, has a ground fountain for kids that squirts water to the theme song of the popular children’s cartoon “Pororo the Little Penguin.”

Another, the “musical fountain” set up at the Seoseoul Lake Park in Yangcheon District, western Seoul, was built around the sound of airplanes landing and taking off at nearby Gimpo International Airport. If the noise made by the airplanes reaches 81 decibels, 41 geysers begin to spout water simultaneously.

Taking advantage of aircraft sounds was considered novel, particularly as it is generally considered noise pollution.

But though they serve as great free playgrounds, ground fountains also have the potential to be harmful to children, specifically because the same unfiltered water is used repeatedly for a certain period of time.

The Ministry of Environment said last month that the water quality of 40 recreational water facilities fell short of safety standards. Thirty-seven of them were ground fountains.

It added that 34 out of the 40 exceeded the acceptable amount for the bacteria colon bacillus, and the ministry warned children who drank the water could suffer nausea or diarrhea.

The Seoul Metropolitan Government has said that it will replace the water in its fountains three times a week, check for colon bacillus twice a week and monitor water quality three times a week during July and August to maintain quality.