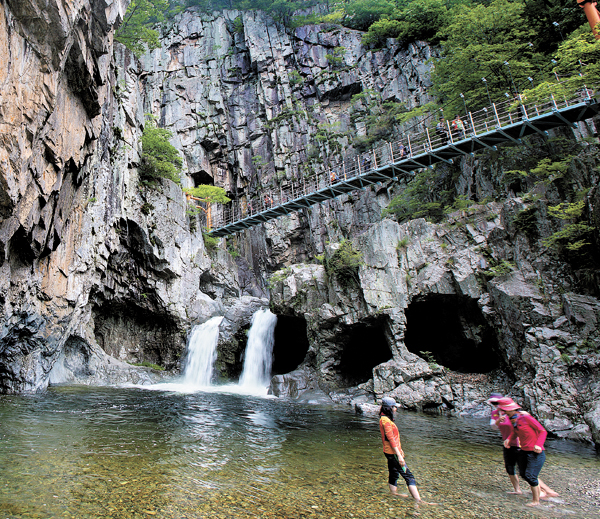 Gwaneum Falls is one of the 12 waterfalls on the Mount Naeyeon Forest Walk. By Ahn Sung-sik

To help you cool off this summer, the JoongAng Ilbo introduces one of the most refreshing walks in the country, a trail that winds itself around the 12 waterfalls of Mount Naeyeon in Pohang, North Gyeongsang.

With scenery that captivated Joseon-era painter Jung Sun, as well as some bizarre rock formations, the 12.8-kilometer (7.9-mile) forest trail is impressive.

Even before the walkway was developed last August, it was a renowned scenic spot. Jung depicted the scenery in his painting “Naeyeon Samyong Chudo” and the scholar Jung Si-han waxed lyrical about it in the book “Backwoods Diary.” Suffice it to say, the trail has been trodden by many curious travelers and hikers alike.

The Mount Naeyeon Forest Walk starts at Bokyung Temple. For Buddhists, the area has a special place in their hearts. Bokyung Temple is located in the middle of the mountain and is a pilgrimage site.

The temple was built in 602, or during the 25th year of King Jinpyeong of the Silla Dynasty. It is surrounded by many smaller temples, which are dotted along the streams and the mountain.

Some people even call the trail the Bokyung Temple Pilgrimage Course.

When we arrived at the ticket booth, the attendee was quick to inform us that we were in luck because the previous day’s rainfall was around 60 millimeters (2.3 inches), so the falls would be extra spectacular. 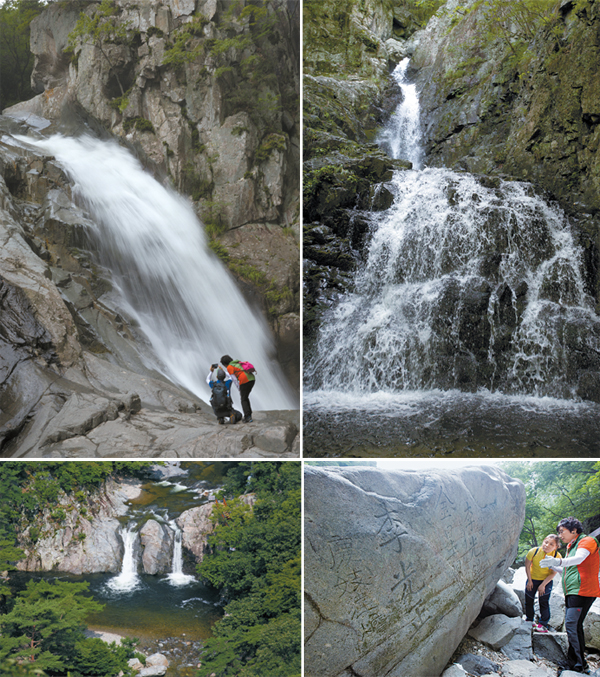 Above left to right: Yeonsan Falls and Sil Falls. Left: From Bokyung Temple the first waterfalls on the path is Sangsaeng Falls. Right: There are more then 300 characters engraved on the boulders of Mount Naeyeon. By Ahn Sung-sik

As promised, as soon as we set foot into the forest, the sound of rushing water surrounded us. Just hearing it made us feel instantly more refreshed. It was only when we got to the final destination, the North Gyeongsang Arboretum, that we realized there was not a moment throughout the trail when we couldn’t hear the rush of water.

The first spectacle you come across on the course is an irrigation dam that was built in the middle of the Joseon Dynasty (1392-1910). To this day, some 14 towns nearby the mountain rely on the dam for farming. In essence, the reservoir is keeping the towns afloat.

After walking through the forest’s narrow passage we found ourselves going up toward Munsu-am. Up a 300-meter (984-feet) slope, the winding mountain terrain against the stream was quite a sight to behold. The two waterfalls that make up Sangsaeng Falls complete the masterpiece.

The area surrounding the falls was full of people who came to start the day with a prayer, even though it was early in the morning. One woman had even brought her fever-ridden newborn with her.

The way the stream curved around the rocks from left and right, appearing like a lion’s head, was what lead to the falls being dubbed twin falls for a short while. Over time the falls have been given many different nicknames. 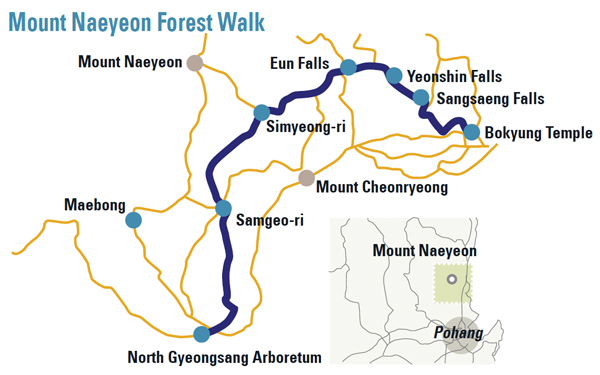 The falls that captivated an artist

Past Sangsaeng Falls lies Bohyun Falls, just below Bohyun-am. These rapids are hidden at a 90-degree angle right next to where the road veers left. The water cascades around strange-looking rocks in an S-shaped formation. The back of the rocks looks as if a dragon is squirming its way to the surface.

From Bohyun Falls onwards, the rest of the falls are in close proximity. The smaller Sambo Falls and Jamyrong Falls can both be seen next. Jamryong Falls is hidden from the trail and is therefore hard to get to. And it certainly doesn’t look like an ascending dragon, which is what its Korean name suggests.

Past Mupung Falls, which is known for being stuffy - its title means windless - the scenery is picturesque.

But Gwaneum Falls, named after the Buddhist Goddess of Mercy, is the most stunning out of all 12 rapids. The rock wall looks like a folding screen, and the two streams of water falling through various caves around the waterfalls are a sight to behold. Gwaneum Cave, which Buddhist monks prayed in, is also nearby.

The pedestrian overpass over Gwaneum Falls leads to the highest waterfalls on the mountain, Yeonsan Falls. 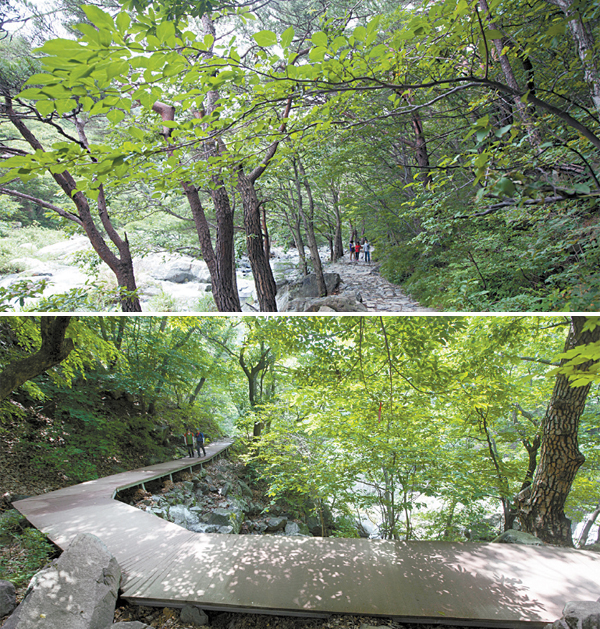 The rocks around the falls had Chinese characters engraved onto them, and there was even a mark left by the painter Jung. The words “Gabinchu Jung Sun” in Chinese mean that he visited during autumn. There are more than 300 names engraved on Mount Naeyeon’s large rocks, and of these Jung’s mark was small and faint - not what you’d expect from someone who made the site so famous.

But the reality is a lot different from the painting. You can’t see all three falls in one view. Still, this is where real landscape paintings made significant advancements. Instead of painting exactly what he saw, as others did, Jung used his imagination, which was rare back in those days. Mount Naeyeon is where Jung was able to tap into his creativity.

After the walk, on the way back to the overpass bridge and toward Gwaneum Falls, the path becomes steep. This is where the walk ends and the hike begins. Most leisurely walkers tend to go as far as Gwaneum Falls and Yeonsan Falls before turning back.

Before long, the wooden decking comes to an end and you have to make your way across a 20-meter-wide, knee-deep stream.

As soon as the shoes come off and the feet are immersed in the water, the smooth surface of the rocks underneath can be felt.

With the water rushing it’s hard to balance, but when you eventually make your way across you’ll be on your way to Eun Falls.

From this point on there aren’t many people around, nor any signs. Luckily, there are ribbons left by prior visitors, which make the path easy to follow.

It’s about a kilometer from Yeonsan Falls to Eun Falls, which originally received its name because apparently it looks like a woman’s private parts. Eum, or its Chinese equivalent, yin, connotes as much. But during the Joseon Dynasty, the name was deemed too vulgar, so it was rechristened as “Eun Falls.” Regardless of the name change, the yin energy can be felt throughout the dark, tree-covered area.

Sil and Simyung waterfalls could easily be missed on a walk.

Sil Falls (sil means thread in Korean) was described as being like a skein with various threads hanging off. No doubt that if Jung had seen the falls he would have picked up his painting brush.

Up until 1960, slash-and-burn farmers lived in Simyung-ri and even now it feels like a different place to the rest of the region. It’s a medley of forest and streams.

Walking through this area leads hikers to Samgeo-ri (Three-Way Intersection). The length from Samgeo-ri to the North Gyeongsang Arboretum is about 4.2 km.

As it’s a well-lit area, the scenery is different to the walk so far. On the way, there are wild berries and flowers standing chest high.

When we finally got to the arboretum, which is best known as Korea’s most elevated - it’s on 650 meter-high terrain - the facility is full of rare and exotic plants.

Even the mountain’s rare trademark species, Korean Berchemia, can be spotted. There is a section in the arboretum that is modeled after the natural landscape of Ulleung Island, as well as an iris planted in simulated wetlands, which was also interesting.

With the mountains and the East Sea coming in at a glance, the final destination is as refreshing as the walk leading to it.