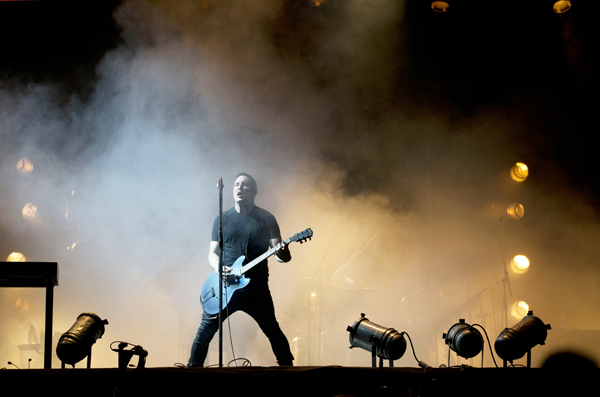 NASHVILLE, Tennessee - Trent Reznor is in a race with technology, from the way he presents his music to fans on the road to how he approaches his job as chief creative officer at Beats Electronics.

Reznor’s Nine Inch Nails embarked on a North American co-headlining tour with Soundgarden that started Saturday in Las Vegas. It’s the fourth leg of a yearlong tour for Reznor, and the 49-year-old singer has reinvented the show to offer Internet-savvy fans something new.

“This will be the fourth kind of radically different production we’ve pulled off this cycle, and it’s been a pain, frankly,” Reznor said before the start of the tour.

But the idea of doing the same thing “over and over for a whole year felt like it would be a little tedious for the audience, and probably would get old for us,” he said. “So we came up with a strategy that might be more exciting for all parties involved.”

Gone are earlier production elements, including a unique and visually arresting lighting display during an arena run last year. They have been replaced with a show designed to fit in more intimate venues with nothing hanging from the rafters.

Reznor even changed the number of musicians in his band to alter the vibe.

“Maybe nobody even notices,” he said wryly, adding: “It’s not bombast. It’s not, ‘Look at these technical things we can do.’ It’s not the explosions and fire or putting robots in space, overwhelming you with spectacle. It’s surprisingly hard to be restrained in that area, I might add.”

Reznor also is working on the score for “Gone Girl,” the third film in his Oscar-winning collaboration with director David Fincher (“The Social Network”). In his role as composer, Reznor and writing partner Atticus Ross contribute ideas, and Fincher ultimately makes the choices.

“It’s kind of fun not to be the top of the pyramid,” said Reznor, “and looking at somebody that I really respect and saying, ‘How can I help?’”

He’s taken a similar approach with Beats, the headphone and streaming company founded by Dr. Dre and Jimmy Iovine that was bought by Apple in May. Reznor said he joined the venture to create an environment where artists wouldn’t feel like they were being exploited in an age where music has lost its value.

“It kind of caught me by surprise,” he said of the sale, “but I’ve had time to think about it. Always having had an immense amount of respect for Apple, it’s a tremendous opportunity, and we can continue the mission that sort of fascinated me in the first place, which was to try to create a place where people can listen to music and actually elevate that experience. To be able to do it with the scope and scale of Apple, that keeps me interested very much.”

He sees his role as something of a futurist and hopes to help create a platform that gives back to music some of the value it has lost.

“Now everybody has access,” he said. “I think it’s opened up the space for a new way of listening to music that could consider that music isn’t just digital aspects. It isn’t files, it isn’t data. There’s magic in there and music deserves to be treated as the fine art that it is.”