Flies are more harmful than tigers

Flies are more harmful than tigers 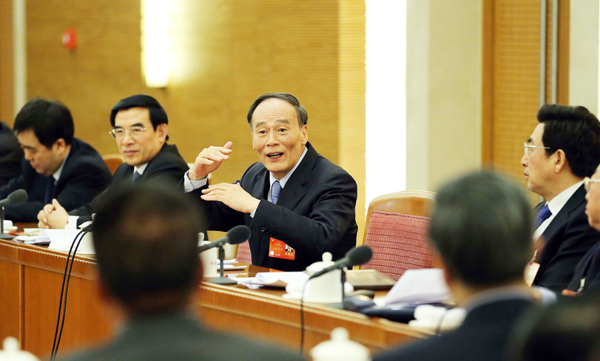 Chinese President Xi Jinping has had 14 summit meetings this month. After a visit to Seoul, he attended a strategic talk with the United States and then met German Chancellor Angela Merkel. In the blink of an eye, he had traveled to Greece and then to Brazil. But Wang Qishan, secretary of the Central Commission for Discipline Inspection, center in the photo, is just as busy as the president. In charge of the “war on corruption,” Wang is cracking down on civil servants, military officers, businessmen and even television anchors.

But as one professor and Chinese history expert said: “His job is very easy. China is traditionally ridden with corruption, and you can find a flaw in anyone if you investigate.” He may be exaggerating, but he is an expert after all. A few reported cases reminded me of Professor K’s comment.

Thirty-three apartment keys were found in a briefcase obtained from Wu Zhizhong, a former legal official of the Inner Mongolia Autonomous Region. He owned apartments across China as well as in Canada. He had set up a Buddhist shrine in his house, where 2,000 pieces of jewelry, luxury goods and antiques were confiscated. The total amount was equivalent to the sum of 300 years worth of his salary.

In 2009, Hou Zuchang, who had several marks on his criminal record, was elected the chief of a village in Hubei Province. He had threatened residents and snatched ballots to put his name on them. Soon, he became public enemy No. 1. He not only appropriated the budget allocated from higher agencies but also forced the locals to buy firecrackers on holidays so he could take their profits. Selling and buying of livestock had to go through him, and he even forced the locals to purchase decomposed maize. He used violence on those who didn’t follow his orders.

People reported his violence and coercion, but the police were on his side. One young man couldn’t stand it anymore and murdered him. And the entire village started a campaign and submitted a petition to save him.

It was like having a robber as village chief. In “Chronicle of a Blood Merchant,” renowned writer Yu Hua wrote that the corrupt local officials were no different from robbers.

As President Xi proclaimed the anticorruption drive, he said that both tigers and flies will be cracked down upon. When it comes to corruption, the flies are more harmful to Chinese people than the tigers. You can avoid rotten food, but the flies will keep buzzing around.