City dwellers make up 92% of population

City dwellers make up 92% of population 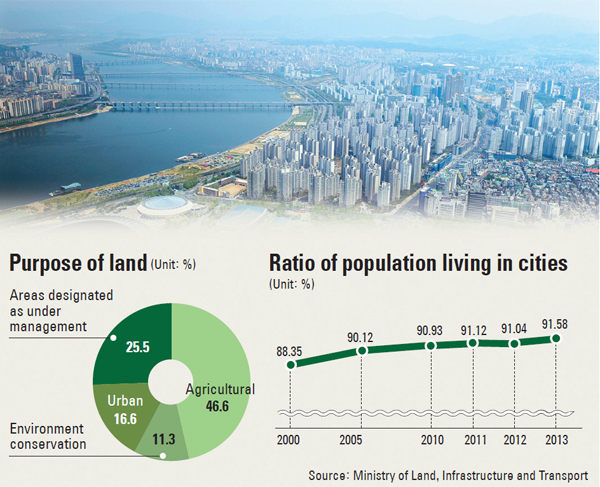 It’s obvious that Seoul has one of the highest population densities in the world. But how many people actually live in all of Korea’s urban areas?

According to a study by the Ministry of Land, Infrastructure and Transport released yesterday, as of the end of last year, nearly 92 percent of people lived in cities, whether it was Seoul, Busan or Gwangju.

The result is half a percentage point more than in 2012, and cities now take up 16.6 percent of the total land mass.

The figure indicates that the urbanization of the entire peninsula is still getting worse. Population in cities has been continuously rising since the 1960s. Back then, less than 40 percent of Korea’s population lived in urban areas. The ratio exceeded 90 percent for the first time in 2005 and has been edging closer to 92 percent ever since.

Seoul is the most populated city, with 10.1 million people. Busan has the second-largest population among the top seven cities, with 3.5 million. Incheon ranked third with 2.9 million and was trailed by Daegu, with 2.5 million. Other cities including Gwangju, Daejeon and Ulsan had less than 1.5 million people.

By province, Gyeonggi had the largest population portion that lived in the city, at 93 percent of the total 12 million people. South Jeolla had the lowest ratio, with 70.16 percent, or 1.3 million people out of 1.9 million, living in the city.