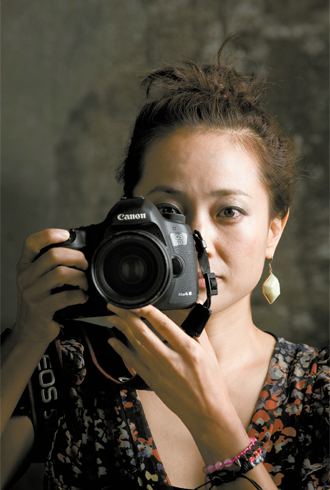 A photo of Jean Jung, also known as Jung Eun-jin, who has been photographing the struggle of women who have been sexually abused in the Democratic Republic of the Congo. By Kwon Hyeok-jae

Korean photographer Jean Jung grew up listening to the painful stories of comfort women who were sexually abused by the Japanese military during World War II. The 44-year-old freelancer has now made it her initiative to travel to commiserate with abused women outside of Korea to stop such tragedies from being repeated.

The photojournalist, whose Korean name is Jung Eun-jin, has focused on taking candid shots of women in pain in areas where political or military disputes are ongoing, such as the Middle East and Africa. She gained international recognition in 2008 for a collection of photographs titled “Tears in the Congo” that she hoped would vividly show the lasting pain of women in Democratic Republic of the Congo who had been sexually abused.

Last month, she made her third trip to the country, following previous visits in 2008 and 2009, and stayed for a month. This time, she went as a messenger to deliver donations collected by the Korean Council for the Women Drafted for Military Sexual Slavery by Japan.

The Nabi Fund, also called the Butterfly fund, was set up two years ago by the council on the International Women’s Day, March 8, to support women who have been sexually abused in the Democratic Republic of the Congo and Vietnam.

But since she is a famed photographer, Jung did more than just deliver donations. Of the photos she took in the last month, she has chosen about 20 to show in Korea.

The exhibition “Tears in the Congo 2014: War That Didn’t End. Tears That Didn’t Dry” runs from tomorrow until Aug. 15 at the War and Women’s Human Rights Museum in Seongsan, northwestern Seoul.

Jung studied Asian art at Seoul National University and then decided to focus on photography while later studying at New York University. She then got her master’s in photojournalism at the University of Missouri.

After working as a reporter at the New York office of the Korean daily newspaper Hankook Ilbo, she decided dive into her photography full time in 2004. Since then, she has been one of the only Korean photographers working in disputed areas overseas. On her first trip, she flew to shoot the struggles between Israel and Palestine. She also lived for a year in Afghanistan to report on women who suffered through child birth and died soon after.

In 2009, she visited Brazil to cover the spread of tuberculosis, especially among the poor. She took photos in Sierra Leone to show the high death rate among women after child birth and most recently she documented water scarcity in the Central African Republic. 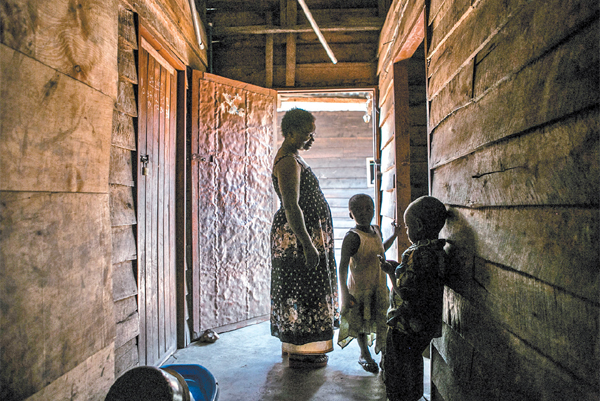 A photo of a Congolese woman, left, who was abandoned by her husband after being raped, in a photograph by Jung. [JoongAng Ilbo]

She has written three books explaining her work including “Kabul Photographer,” published in 2008.

She sat down to talk with the JoongAng Ilbo, an affiliate of the Korea JoongAng Daily, last week about what she witnessed and felt in Democratic Republic of the Congo.

Q. Has the situation gotten any better since 2008 when you first went to the Democratic Republic of the Congo?

A. It felt like the northeastern part of Congo was more organized than five years ago. Many of the roads, which were covered with lava due to a volcanic explosion in 2003 are now paved, and buildings look much cleaner. But the pain of sexually abused women has continued.

How would you describe the ongoing situations in Congo for people who are relatively ignorant of the issues?

After the genocide in neighboring Rwanda in 1994, rebels of Hutu tribes escaped into Congo and Tutsi rebels plundered local villages and sexually abused women. Rape has been used as a weapon in the war to discourage soldiers on opposite sides. Back in 2008, there were 14,245 rape cases, which means there were about 40 rapes daily. In 2012, another rebel group called M23 rose up and the country was again embroiled in war. The sexual abuse cases were down to 4,689 in 2011 but started to rise again to 7,075 the following year.

How bad were the damages done to women?

For external injuries, many of the women develop fistula in the reproductive area which results in urine leaks. Because husbands abandon their wives, women left with children suffer from other traumas [such as mental disorders]. The M23 rebels and Congo government made a peace treaty at the end of last year, but there are still a lot of civilian raids going on in the area.

What can we do to help?

It is hard for us to step up to solve problems in international disputes, but it might be possible to give indirect help by sponsoring a non-governmental organization in the area, or providing medical help. I met a young Korean who works at the United Nations and that person really had talent in speaking [foreign] languages as well as leniency in working with internationally difficult issues. I hope more people go to work at these international organizations.

So the money you donated was part of an attempt to give some small yet meaningful help?

We delivered $2,800 to a local non-governmental organization called Hope in Action that assists hospitals in alleviating symptoms women have developed from fistula. The donation was used to operate the group, and to help with surgeries and provide food.

The amount doesn’t seem that big. Does it really help in a practical manner?

It could be the start, like sowing seeds in a field. The book “Half the Sky” written by New York Times columnist Nicholas Kristof and his wife Sheryl WuDunn, says that between $100 and $200 can save one woman.

When was the reaction from the locals about the donation?

Korea’s image is positive. When I delivered the donation, I told them the funds were precious as they were collected by Korea’s comfort women. And I told them Korea was also colonized and had gone through an internal war. Everyone seemed shocked. They expect more support from us, and to build a partnership.

You have worked as a freelance photographer for 10 years. Do you think a photo can change the world?

Whether I work or not, the world wouldn’t change drastically immediately. However, if I stop doing what I do, a helping hand might not be given to someone who needs it. Back in 2009, I held an exhibition to raise funds for a trip to the Congo at a church in Seoul, and I was so touched by young girls donating 1,000 won ($.97) or 2,000 won. That made me realize that my photos can be a stepping stone to make small changes here and there and I want to continue doing that.

What is it like to be a freelance photographer rather than working for a company?

I would recommend people be a staff worker at a company rather than working on your own. If you insist on working as a freelancer, the first, second and third most important thing you need to do is to manage money well. When you run out of money, you are in big trouble.

Didn’t you ever feel despair toward the world after seeing such violence?

I have shed so many tears. I have often thought about killing myself. I had some serious panic disorders and depression in 2011. However, these days, I feel more like “I have no regrets even if I die now” rather than “I want to die.” Before, I also had a fear that I had to make a living as a photographer but the fear has dissolved. It’s because many people who seem to have much more miserable lives encourage me by saying “God bless you.”

Major incidents in the 20th century, including the Second World War, the 1950-53 Korean War and the Vietnam War, were largely documented through the eyes of Caucasian males. There may be some disadvantages [to working at the scenes] because I’m a woman, but there are also some advantages. [But] journalists need to have an impartial stance. My focus doesn’t fall on the disputes but on the people who have been suffering and have had their basic human rights infringed. I focus especially on issues involving women. Because Korea also has a history of being invaded by powerful countries, I think we can understand the situations that weak and underdeveloped countries go through better than Westerners.