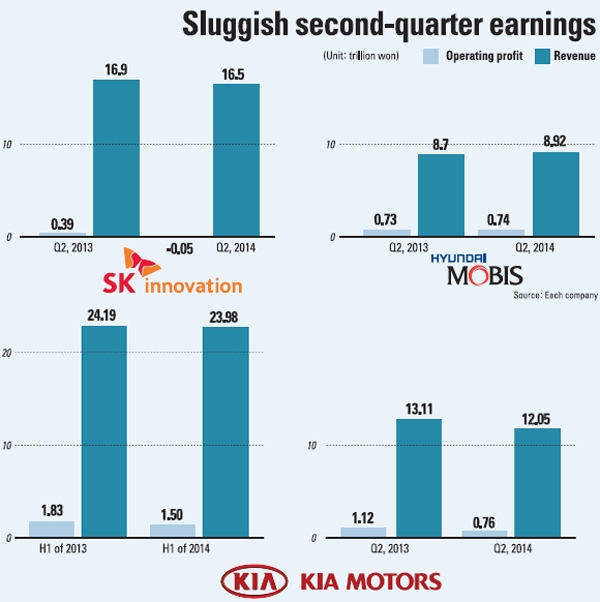 Major companies announced financial results for the second quarter yesterday, most of which declined due to the strengthening of the Korean won in the first half.

Its operating profit for the first half of 2014 was 1.5 trillion won, down 17.8 percent from the same period last year. Its revenue was 23.98 trillion won, a 0.9 percent fall from last year.

“As 75 percent of our business comes from exports, a currency rate that fell 58 won on average in the first half caused a deterioration in profitability,” said the automaker in a release.

“Nevertheless, we could manage the decline in our profitability by actively rolling out policies such as value pricing based on robust sales in overseas markets and efficient management of marketing and promotion costs.”

The company plans to make up for the lowered profitability in foreign markets in the second half and continue to force growth in the domestic market with the launch of the new Kia Carnival and Sorento in the third quarter.

“Even after the second half, difficult business conditions are expected to continue, but we will enhance profitability by further increasing brand awareness with competitive products and stable quality,” said a spokesman for Kia.

The company posted its second operating loss in two quarters of more than 200 billion won during the April-June period.

The fall in quarterly operating profit was mainly due to sluggish performance in the petroleum business overseas due to the strong Korean won and lower margins from the No. 1 residue fluidized catalytic cracker (RFCC), according to the company.

Continued weak market conditions in aromatic products related to the chemical industry contributed to the fall.

“SK Innovation showed a weak performance in the second-quarter mainly due to an unfavorable foreign exchange rate and a decline in refinery margins,” said Cha Sung-keun, head of finance office at SK Innovation.

“However, SK Innovation will overcome current conditions in the latter half of the year by taking proactive countermeasures against risks based on primary competitiveness.”

Hyundai Mobis, on the other hand, saw a 3.4 percent increase in its second quarter earnings compared to last year with strong sales in China and Europe. Its half-yearly operating income rose 7.2 percent from the first half of last year.

Unlike Hyundai Motor and Kia Motors, which are under the same Hyundai Motor Group, Hyundai Mobis managed the exchange rate risks and reaped strong sales of new cars in China and Europe in the first half.

Hyundai Mobis had an 11.4 percent on-year increase in sales in China as sales of high-end SUVs grew.

The company announced that it had 1.486 trillion won in revenues, a 19.8 percent increase from a year earlier, and 700 million won in operating profit, down 97.7 percent from the same period last year.

However, the company, which had posted operating losses for three consecutive quarters, at least turned a profit. Its operating loss in the first quarter was 38.9 billion won.

“Its revenues fell 7.7 percent from the previous quarter, and that is because of sluggish sales of Samsung’s Galaxy S5 and the slowdown in the battery market,” said an analyst at a local securities company.

“However, the batteries for electric cars and the energy storage system made up for some losses.”