Antarctica’s point of no return

Antarctica’s point of no return 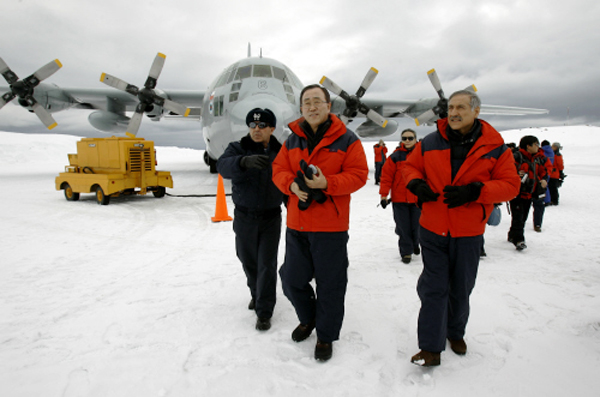 POTSDAM, Germany - Recent satellite observations have confirmed the accuracy of two independent computer simulations that show that the West Antarctic ice sheet has now entered a state of unstoppable collapse. The planet has entered a new era of irreversible consequences from climate change. The only question now is whether we will do enough to prevent similar developments elsewhere.

What the latest findings demonstrate is that crucial parts of the world’s climate system, though massive in size, are so fragile that they can be irremediably disrupted by human activity. It is inevitable that the warmer the world gets, the greater the risk that other parts of the Antarctic will reach a similar tipping point; in fact, we now know that the Wilkes Basin in East Antarctica, as big or even bigger than the ice sheet in the West, could be similarly vulnerable.

There are not many human activities whose impact can reasonably be predicted decades, centuries, or even millennia in advance. The fallout from nuclear waste is one; humans’ contribution to global warming through greenhouse-gas emissions from burning fossil fuels, and its impact on rising sea levels, is another.

Indeed, the latest Intergovernmental Panel on Climate Change (IPCC) report stated, in uncharacteristically strong terms, that the sea level is “virtually certain” to continue to rise in the coming centuries or millennia. Moreover, the greater our emissions, the higher the seas will rise.

But the recent revelations about Antarctica are different. Rather than reacting to global warming with gradual and predictable patterns of change, the West Antarctic ice sheet has suddenly “tipped” into a new state. A relatively small amount of melting beneath the Amundsen Sea’s ice shelf has pushed its grounding line to the top of a sub-glacial hill, from which it is now “rolling down.” Simply put, one thermal kick was enough to initiate an internal dynamic that will now continue under its own momentum, regardless of any action that humans might take to prevent it.

It is not completely clear whether humans have caused this tipping - though nothing like it has ever occurred during the 11,500-year Holocene period before humans started interfering with the planet’s energy balance. But that is not the point. What is important is that we recognize the existence of gigantic parts of the earth’s climate system - such as West Antarctica’s three-quadrillion-ton ice sheet - that can be tipped when a fractional temperature rise occurs in key locations.

This risk is no longer merely theoretical. For the first time, findings based on observations and computer simulations all point to the same conclusion: the huge Amundsen Sea sector of West Antarctica has begun an irreversible ice discharge, and nothing can now halt the subsequent drainage of the entire basin. It has passed the point of no return.

That is why we must now focus on similar topographic conditions elsewhere. If an “ice plug” near the coast of Wilkes Basin melts or breaks off into icebergs, the basin’s huge quantities of water will drain into the ocean. Although no one knows precisely what might destabilize the Wilkes Basin, we can be fairly certain that further global warming, caused by greenhouse-gas emissions, will increase the risk.

The fact that sea levels will continue to rise is now clear. But we can still determine how high and how fast levels rise by controlling the degree of global warming that we cause. Climate change is caused by mankind, so the good news is that mankind can stop it by cutting greenhouse-gas emissions.

Although West Antarctica’s fate is sealed, we may still be able to prevent the collapse of East Antarctica’s marine ice sheet. That means deciding - sooner rather than later - which path to follow. The current path risks further destabilization in Antarctica; choosing the alternative path of a new energy system for the planet is our last best hope.

*The author is a climate scientist at the Potsdam Institute for Climate Impact Research, and professor of the dynamics of the climate system at the Institute for Physics and Astrophysics, Potsdam University, Germany.