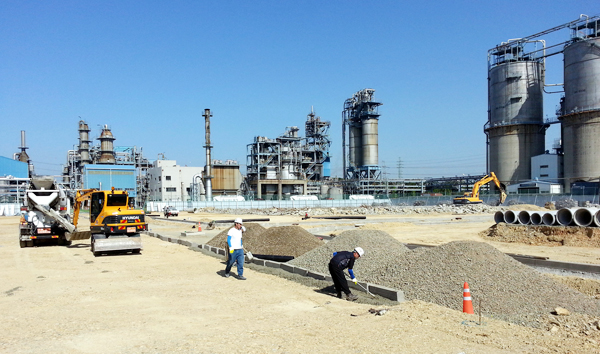 Construction workers prepare to pave a road in Hyosung’s Yongyeon 2 plant in Ulsan in order to build a new polyketone factory. Hyosung said that construction is expected to be finished by March. Provided by the company

Hyosung, a major chemical company in Korea, said yesterday that it will invest 125 billion won ($121 million) to build a new polyketone plant in Ulsan as the company continues to bulk up its businesses.

Polyketone is a high-performance polymeric material that Hyosung revealed last November after investing 50 billion won over 10 years to develop it. The material can be used as a structural and finishing material for automobiles and electronics and can be used in tire cord and industrial ropes or belts.

Hyosung, the core company of the nation’s 24th-largest conglomerate, said that the new plant, which will have the capacity to produce 50,000 tons of polyketone annually, will be built near its Yongyeon 2 plant in Ulsan. The company already has one polyketone production facility in the industrial city, but its annual capacity is only 1,000 tons.

The company said that the second phase of the plant’s construction will begin this week. Since Hyosung made the decision to invest in polyketone production in November, it has put together a team to prepare for constructing the new facility.

Since the development of polyketone, Hyosung said that various plastics companies have enquired about the product and that it will start marketing the product as soon as the plant is finished.

“Polyketone will be a core business for Hyosung to become a global chemical material company that emphasizes technology and quality,” said Hyosung’s Chemicals Performance Group Chief Management Officer Cho Hyun-sang. “We will shake the stage of the global chemical market.”

Hyosung predicts that the global plastic market will grow at least 5 percent per year and will be 66 trillion won next year and the company aims to take 30 percent of the market share in the future.

Despite facing troubles such as a tax investigation and a lawsuit between executives, Hyosung has been aggressively expanding.

According to a recent report from E*Trade Securities, Hyosung’s operating profit in the second quarter is expected to be 166.9 billion won, which is slightly lower than the market consensus of 177.1 billion won. However, analysts said that its performance is likely to be more stable than other companies.

“Compared to others, Hyosung’s performance is stable, because of its textile and chemical businesses,” said E*Trade analyst Han Seung-jae.

Its textile business, highlighted by its No. 1 spandex brand Creora, has seen its global shares steadily expanding thanks to the stable price of raw materials. Hyosung, which has manufacturing facilities in China, Turkey, Brazil and Vietnam, recently invested $60 million in its Vietnam plant to produce 50,000 tons of spandex.

“Hyosung not only tries to increase its supply capacity, but to provide products that meet customers’ needs,” said Cho Hyun-Joon, president of Hyosung’s textile performance group.

Besides Creora, the company is also the top producer of polyester tire cord, seat belts and air bag materials.