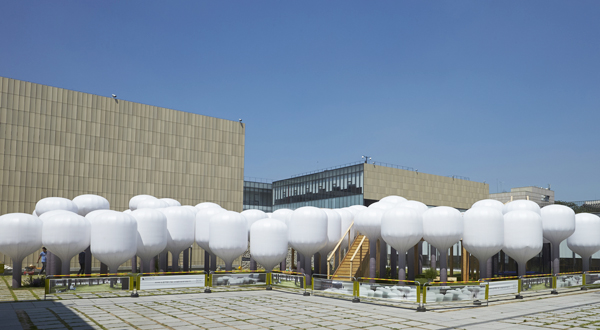 The program was first introduced in 1998 by the Museum of Modern Art in New York (MoMA) to promote gifted young architects. The winners of the program get the opportunity to display their work in MoMA. The program is also a gateway for success. The winners of YAP not only receive public acclaim but capture the attention of the global architecture industry and are introduced to major building projects.

After New York, YAP expanded to Santiago, Chile in 2010, Rome, Italy in 2011 and Istanbul, Turkey in 2013. This year, Korea became the first country in Asia to partner with the program.

Six judges selected by the co-host, Hyundai Card, as well as curators from the MMCA and MoMA analyzed 26 teams and their portfolios recommended by the architecture community.

The team’s work, “Shinseon Play,” features 60 air balloons that resemble clouds and includes a water spray system that creates a mist to give viewers an atmosphere of being surrounded by Shinseon, a mythical figure who played among the clouds.

A wooden walkway among the white balloons lets spectators feel as though they are walking through the clouds. The water spray cools the air around them, adding to the heavenly atmosphere. There are also trampolines installed below the structure that let viewers jump through the balloons, just like Shinseon would jump among the clouds.

The balloons also create shade so people can rest on the benches nearby without being scorches by the sun. The structure will be on display at the MMCA until Oct. 5.

Hyundai Card chose YAP for its 15th culture project as it suits the purpose of the project. The company has introduced many less-known genres of art and its artists through its project. For example, in 2011, it invited actors of Comedie-Francaise, the state theater of France, to perform “The Imaginary Invalid,” a play by Moliere. Last year, Kraftwerk, a German quartet known as pioneers of electronic music, held a concert supported by Hyundai Card.

Although buildings and structures are part of our life and one of the important fields of art, there were not many exhibitions for architecture. Even for Hyundai Card’s project, which has been introducing rare genres of art to the public, architecture is a new field.

“We hope that this culture project provides an opportunity for many people to familiarize and take interest in architectural artworks,” said a Hyundai Card official.