Residential building is booming in Pyeongtaek

Residential building is booming in Pyeongtaek 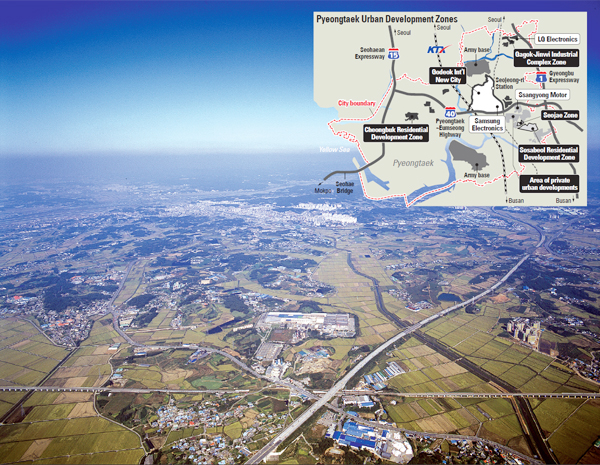 Urban development in Seoul and other metropolitan areas, mostly around the Gyeongbu Expressway that stretches from Seoul to Busan, has spread as far south as Pyeongtaek, Gyeonggi.

The development fever that began in Gangnam, Seoul, has passed Bundang and Pangyo in Gyeonggi and reached Suji District in Suwon, and Dongtan in Hwaseong.

Unlike other areas where development was spearheaded by state-owned enterprises such as Korea Land and Housing Corporation (LH), much of development in Pyeongtaek is being undertaken by private developers.

Several factors have led to the building hype in Pyeongtaek. One is the expansion of the U.S. Forces Korea (USFK) base in the city and another is the development of Godeok International New City. A 2012 announcement by Samsung Electronics that it would build its largest facility in Godeok Industrial Complex added to the residential building boom.

In Seojae development zone, where construction on multiplex houses started two years ago, building is intensifying. Seojae zone has many one-room apartments due to the huge influx of workers at Samsung Electronics’s factory in Godeok. There are more than 600 sites designated for multiplex housing, and about 400 buildings have been either partially constructed or finished.

The value of land in the area has also risen. In Seojae zone, where mostly one-room complexes are under construction, the value doubled after Samsung Electronics broke ground on its factory there in May last year. Even the value of land that is not part of an urban development zone leaped by about 50 to 60 percent.

The boom is projected to continue with the expected construction of housing for USFK soldiers and the possible revival of Brain City, an industrial complex that was expected to span more than 4.8 million square meters in Doil-dong. Experts project a bright future for Pyeongtaek, largely backed by investments from major corporations such as Samsung Electronics and LG Electronics.

The two biggest projects in Pyeongtaek are Seojeong-dong and Godeok International New City, which are expected to draw 134,000 people to their 13.2 million-square-meter area. A total of 3.95 million square meters is set aside for the Samsung Electronics factory, which is expected to be finished by the end of 2016. Several apartments, such as Hyosung’s, have been constructed in the 3 million-square-meter Sosabeol zone, where Woomi, Bando and LH have apartments up for sale.

In Seojae zone, construction of one-room apartments began in 2012. Now, 73 percent of the 621 construction sites have been given permission to start work. About 220 buildings have been completed and the rest are in the works. 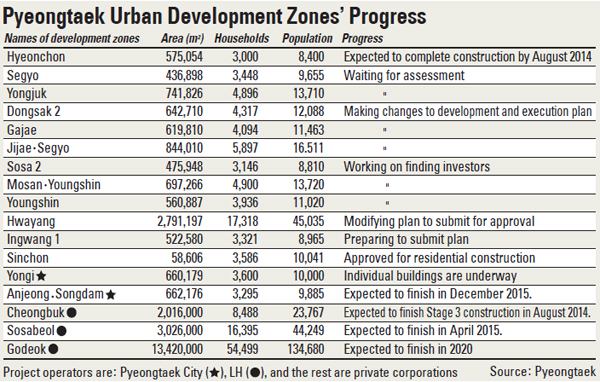 In Hyeonchon, rezoning of some land was delayed, which pushed the groundbreaking back to early August. In Yongjuk zone, the land has been properly designated, but complexities related to compensation between the investors and builders will likely delay the start of construction until late this year, according to an official at Pyeongtaek City Hall. Other zones are still working on their development plans, and it is expected that construction will begin next year.

In Sosabeol zone, a 230-square-meter plot is worth about 300 million won, with some owners adding a premium of 30 million to 100 million won. In areas that are not part of a development plan, land costs about 2.5 million to 3 million won per 3.3 square meters and areas near major roads, suitable for building stores, are about 5 million won.

Unlike land prices, apartment costs haven’t changed much. Hyosung’s Baeknyeongayak apartment, which is already occupied, is about 8.9 million to 9 million won per 3.3 square meters.

Multiplex housing in the area has become a popular investment. “In the case of Seojae zone, a multiplex house with eight spaces totaling about 198 square meters is set [to sell] for 1 billion won,” said Yoon Seok-ryul at Richmoms Real Estate. “A 363-square-meter house with 17 units goes for about 1.45 to 1.5 billion won. The price varies depending on the location and the structure of each space.”

Some say that there is an oversupply of one-room apartments in the area. For instance, Seojae zone has about 1,500 to 2,000 housing units, and the builders are having a hard time finding tenants; it is estimated that 20 to 30 percent of the units are empty. High prices and excess supply are making one-room apartments a bad investment.

“Some [companies] aim to attract investors by proposing higher than actual fees to pretend they are good investments,” said Lee Sung-mi, the head of Pyeongtaek Real Estate. “They exaggerate the monthly rent or jeonse fee and post them online. Many items for lease posted online are different from what they actually look like, so it is important to visit the places and check before investing in them.”

Some say the real estate market will freeze after Godeok New City is completed.

“Since Godeok plays a main role for Pyeongtaek, wouldn’t its properties be the most popular? It is possible that the prices will drop in other areas with lower popularity. Places including Seojae zone are priced too high, and this might be controlled soon,” said a Pyeongtaek City government official.

Most realtors would argue that their property is the best investment but it is important not to invest before examining many places and hearing experts’ advice. There are concerns about an oversupply of housing once Godeok New City is completed, which will bring the housing prices down.

There are also possibilities of too many one-room apartments nearby, so investors should choose areas with great demand in order to better withstand the oversupply.