If the Bank of Korea fails...

If the Bank of Korea fails... 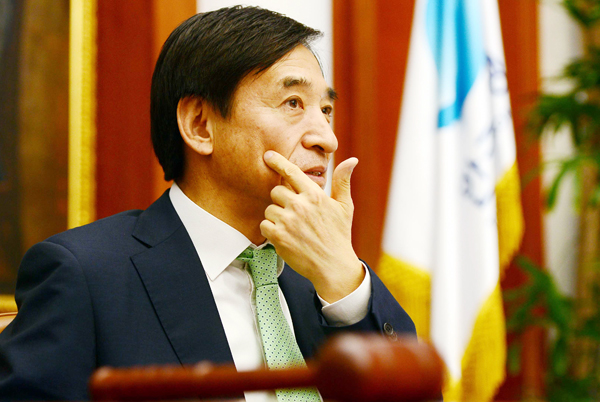 U.S. Federal Reserve Chair Janet Yellen is often described as “an iron fist in a velvet glove.” She may appear soft and genial, but projects strong charisma when she promotes a policy. “The mandate of the Federal Reserve is to serve all the American people, and too many Americans are still unable to find a job and worry how they’ll pay their bills and provide for their families,” Yellen said on Jan. 9 when she accepted the nomination for the Fed position at the White House. Those with keen eyes must have realized that she would not give up quantitative easing and a low interest rate until enough jobs are added. Yellen is not budging.

However, one would be mistaken to believe she alone decides the fiscal policy of the Federal Reserve. What drive the Fed are its goals: maximizing employment and keeping prices stable. When the financial crisis led the market into an extreme slump, the Fed set the inflation target at 2 percent.

The market and the public have solid trust in the Federal Reserve. They don’t doubt the decisions of the Fed even when the timing to increase the interest rate is disputed. So how about the Bank of Korea? The BOK’s goal is to keep prices stable. Unfortunately, its objectives don’t include maximizing employment. Major countries’ central banks have been desperately trying to create jobs since the financial crisis. The Bank of Korea’s goal-setting lags behind the global trend. How about price stability? For the three years from 2013 to 2015, the Bank of Korea is aiming to keep the rate of consumer price increases at 2.5 to 3.5 percent. However, price increases have been trapped at the 1 percent level for 18 months, not even close to the goal. The Bank of Korea is failing to meet the objective of price stability. High prices are certainly problematic, but prices that are too low are also undesirable. Major central banks are releasing money because the market gains vitality when the price is pulled up from the bottom.

No central bank can be almighty, and that’s why some policy failures and mistakes are tolerated to a certain degree. However, it is different from breaking a dish while washing or not doing dishes at all. Has the Bank of Korea been making sufficient efforts to meet the goal? The BOK lowered the interest rate only once in May 2013, and it has been fixed for 14 months now. The BOK seems to lack the will and effort to attain the target. The trust of the market is based on the success of the monetary policy the central bank promotes. But the market would not trust the bank if it is not working hard to attain the goal it has set. The Bank of Korea does not take accountability for failing to meet the goal. However, the Korean economy has to pay the price. And these economic pains are left for Koreans to suffer.