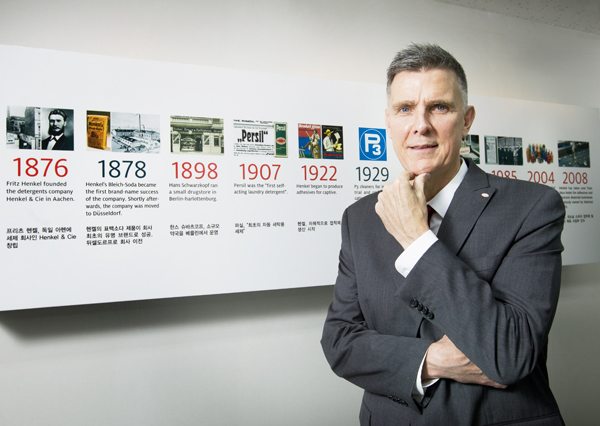 Many Koreans may not be familiar with Henkel, but once they learn about the company’s diverse range of products and how it engages with society, they will notice its long tradition of innovation and efficiency.

The German company, founded in 1876, started out as a detergent maker, expanding its business with its first innovative product called Persil. Although it started out making home products such as the well-known brands Homekeeper and Homemat, industrial adhesive products are now a large part of its business. As the center of cutting-edge technology and leading electronics companies, this is where Korea comes in.

“We have recently invested in January and opened up an innovation center in Gasan,” said Gregg Rossier, president and representative director of Henkel Korea. “Although a relatively small investment, as it was only in the 5 million euro [$6.69 million] range, it was the first step toward building advanced technology capabilities here in Seoul.”

In an interview with the Korea JoongAng Daily at his office in Mapo District, western Seoul, the executive explained the role that the Gasan Innovation Center will play in Henkel’s global business.

“Specifically, the role of Gasan is to work with global Korean companies headquartered here that want us to work with them and develop innovative technology for Korean customers and the Korean market, which is a little bit different from the market in the U.S. and China,” Rossier said.

Q. Can you elaborate on the role of the Gasan Innovation Center from the point of view of Henkel’s headquarters?

A. It plays a huge role. Let me first talk about Henkel Korea’s role and strategy, and Gasan in particular. Korea is one of the most wired countries in the world, in relation to Internet, handheld devices and display. In its [corporate] strategy, Henkel formally identified Korea as a focus growth market, which means that we have the benefit of attracting additional investment from corporate [headquarters].

The good news is that the company [headquarters] is going to invest. The responsibility that comes with that is daunting, because the company expects us to really work on moving from a supplier level with our customers to a strategic partner level. That’s a role and path that we have to follow, and that involves putting technology capability closer to the customers. That’s where Gasan comes in.

Henkel always had core advanced research in various parts of the world. For many years, they were in Europe, the United States and Japan. But approximately 25 years ago, we first opened our Shanghai office in a city that is an Asia-Pacific hub. But the company felt it was not enough.

The Korean market is such a great opportunity for us to develop technologic capability. Gasan is the first step. Specifically, the role of Gasan is to work with global Korean companies headquartered here that want us to work with them and develop innovative technologies for Korean customers and the Korean market, which is a little bit different from the market in the U.S. and China. Then, the value that we bring to global companies is the biggest part of our value. Henkel is one of the few companies that can not only develop the technology locally, but we can put it on a device or component anywhere in the world. That is the value that we bring.

Henkel has four manufacturing sites in Korea including one in Ansan, Gyeonggi. Are these sites price competitive? Aren’t labor costs high in Korea compared to other countries like China and Southeast Asian countries?

Everything runs in cycles, and there have been a lot of stories recently. Twenty years ago, China was the low-cost country where companies from the West were outsourcing processes to because the labor cost was so low. Now, China has in fact seen its labor cost increase as its middle class grows and the quality of living enhances. China is starting to see decisions made in which companies are moving to even lower-cost countries such as Vietnam and Mexico. So everything is really cyclical. A big part of what we do is to stay competitive because Korea has challenges with its labor cost, but it’s something that we have to deal with.

Who are your main customers?

I’m not supposed to disclose or name major customers. If you look at all the major producers in Korea in electronics, flexible packaging and automotive industries, we virtually work with every large company in Korea and many small and midsize companies. The automotive business is also very important. We’ve been in the market for many years. Our adhesive products are used basically in all parts of our lives, from smartphones to display, home appliances to packaging. There are special-purpose adhesives to put auto parts, construction materials and aircraft parts together. Those adhesives are invisible so we call them the invisible heroes.

Based on personal career background, you have also worked in China and Japan in the past. What differences have you found so far in terms of the business environment among the three countries?

It’s an interesting question. I actually talked about this with my team. I am fortunate that I have had the opportunity as a Westerner to have lived in China, Japan and now in Korea. From a business standpoint, I think there are many more similarities than differences.

I would say, though, if I had to compare the three countries in relation to business, Korea and Japan are probably much more similar because both countries are known more as technology developers, whereas China is a very fast follower at this point.

But I think most people, not just in Korea, but globally, would agree that Korea and Japan are probably more similar as they’re known as technology developers and also from an innovation standpoint. But other than that, companies and businesses in all three countries want the same things. They want to develop technology that fits market needs and then deploy the technology anywhere in the world, which is completely different from 20 years ago.

In numbers, though, is there a difference among the three markets for Henkel in terms of size of the markets?

There are two ways to look at that. From pure size of the market, there is no question that the Chinese market - juts the sheer size of the consumers - is much bigger. If you look at our laundry and homecare business, the China market is much bigger because there are more consumers.

Korea will never be as big of a market. However, if you look at another sector, say electronics, our market share in electronics in Korea is lower than our laundry and homecare market share is in Korea. So from our standpoint, we feel that there are certain strategic markets in Korea. There is enormous opportunity for us - semiconductors, electronics - and we still think there are a lot of improvements we can make in automotive, even though we have big customers already.

Are there any examples of recent collaborations with Korean companies you can give?

We tend to not want to discuss specific customer names, but we can give global examples. There are a couple of instances. Evonik [Industries] is a global partner of ours. We have worked with it on developing special surfactants, which now go into our laundry detergents everywhere in the world. It allowed us to develop better technology, which the market accepted well.

We also have a global partnership with a company called Nordson [Corporation], a global leader in application in dosing equipment for our adhesives. In our industrial accounts, because of Nordson’s expertise, its global network and customers allow us to bring more value. We’re not just selling them our products but we’re developing solutions.

Vitriflex is a California-based start-up that we’re going to collaborate with in innovative solutions for the electronic and semiconductor market. That will definitely benefit us here in Korea. That’s all I can share, but I’m sure that the collaborations with multiple suppliers - both start-ups and matured companies in Korea - is part of our strategy.

As a foreign company investing in Korea, like in any other market, there should be some challenges and regulations that you find quite excessive. Have you noticed any?

Honestly, the biggest thing Henkel has run into, just like a lot of other companies, is the audit and tax situations. There was a dialogue [with the government this year] and we’re hopeful that things will improve in that regard. That’s probably the biggest issue that has been brought up in the past.

But there are certain audits foreign companies have to go through, which we feel, in general, they are a bit overdone and a little bit excessive. It’s just a process of trying to streamline the process and make it less cumbersome. We’re confident that the government is well aware and that it’s not just an issue from our standpoint. 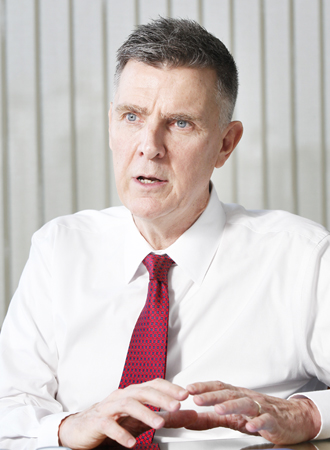