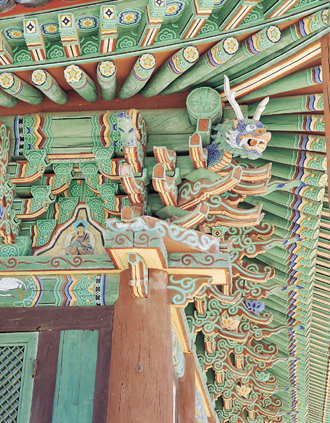 Geumsan Temple on Mount Moak was built in the first year of King Beop (599) of the Baekje Dynasty. It was reconstructed by Monk Jinpyoyulsa in the second year of King Hyegong (766) of the Silla Dynasty.

The hall was burnt down during the Japanese invasion of Korea and was rebuilt in the 13th year of King Injo (1635). As a Buddhist sanctuary with a preserved Maitreya Bodhisattva statue, it was also called by other names like Yonghwajeon, Sanhojeon and Jangnyukjeon.

Each floor has its own names; the first is called Daejabojeon (Hall of Great Mercy and Treasure), the second Yonghwajihoe (Gathering of Dragon and Beauty) and the third is Mireukjeon (Hall of Maitreya).

As a whole, it is considered as an important cultural property in Korea, being the only three-story wooden structure in a Buddhist temple.