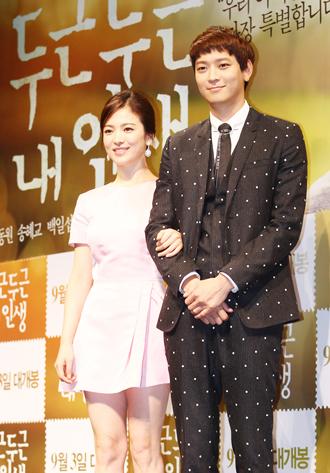 Actor Kang Dong-won and actress Song Hye-gyo have started promoting their upcoming movie “My Palpitating Life,” which will be released in Korea on Sept. 3.

The two were at a press conference yesterday at Apgujeong CGV in Gangnam, southern Seoul.

Kang and Song play young parents who give birth to a child when they’re 17 years old. The movie, based on the novel of the same title, depicts young parents raising a son who is suffering from progeria, a rare genetic disorder that prompts premature aging.

During the press conference, Song said she never knew Kang had such a great passion for acting.

“After working with him in the movie, [I saw] he had an incredible passion toward his characters,” Song said.

This wasn’t the first time the actors had worked together. Four years ago they appeared in the film “Love For Sale,” which was never released in Korea.