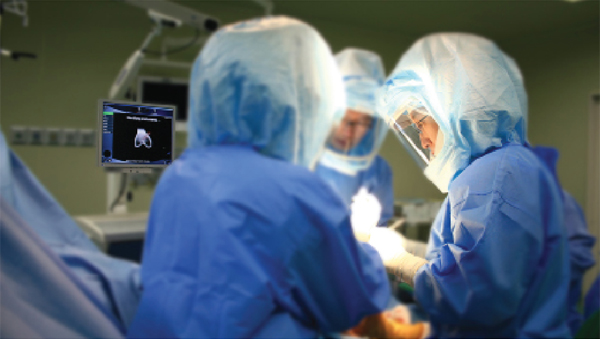 Above: Doctor Jeong Jae-hoon, right, performs a surgery, Below: Jeong with a foreign patient he operated on.Provided by Wooridul Hospital

With a growing number of foreign visitors to Korea, many public places have signs in foreign languages, most of which are in English, Japanese and Chinese. Wooridul Hospital, near Gimpo International Airport, is no exception, but there, the signs are in English and Russian.

The sign is one of many traces of a growing number of Russians coming to the country for medical treatment. In 2009, Russians accounted for 2.9 percent (1,758) of 60,201 foreign patients. In 2013, that number grew to 24,026, or 11.4 percent of the 211,218 foreign patients. The quick growth in medical tourism to Korea is now drawing patients for special procedures, such as joint surgery.

Wooridul is a network of specialized hospitals for spine and joint injuries, with 10 facilities in Korea and three abroad. Last year, 337 Russians came to Wooridul hospitals in Korea, making up about 27 percent of foreign patients at Wooridul.

Wooridul’s foreign visitors numbered 557 in 2006 but more than doubled to 1,241 as of last year. “Just this year, a Russian national judo player visited to get knee surgery,” said Dr. Jeong Jae-hoon, chief of the orthopedic surgery department at Wooridul Hospital in Gimpo, Gyeonggi.

The constant increase has come as a surprise to Wooridul since it is such a highly specialized hospital, said Hong Ji-yea, a marketing manager at Wooridul International Patients Center. Patients send their medical records to doctors, then consult with them before deciding to come to Korea. After that process, about 10 percent of people decide to come, usually for surgery, according to Hong. 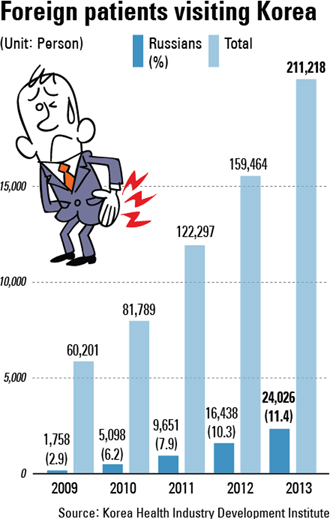 “We’re seeing a great increase in the number of patients from Russia, Mongolia and China. For foreign patients, geographical proximity is an important factor,” Jeong said. Most Russian patients are from the Vladivostok area, which borders North Korea. It takes about three hours to fly from Vladivostok to Gimpo, which gives an edge to the Wooridul branch in Gimpo, just 10 minutes from the airport. However, the number of patients from western Russia is also increasing because some treatments are cheaper in Korea than in Europe.

"I don’t see a lot of differences when it comes to techniques,” Jeong said. “The doctors here are skilled, we have the services and the medical equipment is high quality. The fundamental studies like biology and the like might have a long way to go in Korea, but we are up to par in clinical trials.”

The joint surgery expert suggested that Korean doctors may be more highly skilled due to a lifetime of using slick metal chopsticks. “Compared to the wooden chopsticks used in Japan or China, the metal ones used in Korea are much harder to use,” he said.

Other than its doctors’ chopstick-honed precision, Wooridul Hospital said it makes efforts to better accommodate foreign patients. “Most foreign patients don’t come by themselves,” Jeong said. “So we have coordinated the wards with extra beds.”

To accommodate larger groups, Wooridul has contracts with 10 hospitals where patients can get discounts and free transportation to the hospital. The hospital also has meals for patients with special diets and prayer rooms for Muslim patients.

But how many patients will use these resources depends entirely on the hospital’s marketing success.

Wooridul has more than 20 agencies in Korea and abroad that connect the hospital with patients. About 90 percent of the agencies work with patients in Russia. Three of the five full-time coordinators at Wooridul in Gimpo speak Russian and they translate every process before, during and after the patients’ hospitalization. In addition to interpreting medical matters, they may also assist patients with the visa process. 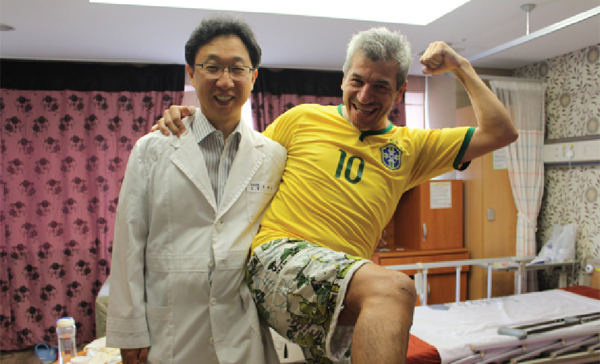 Wooridul occasionally holds expos to which it invites medical tourism agencies and also gives free, non-vital medical treatment abroad as a part of its marketing strategy. There are about three or four trips per year, Hong said. This year, Wooridul doctors have traveled to Sakhalin, Russia, and Ulaanbaatar and Darhan in Mongolia.

As the number of foreign patients grows, word of mouth has become another marketing tool, Jeong said.

Korea’s medical tourism industry has great potential, Jeong said. But once more hospitals have marketing strategies in place to attract patients from abroad, maintaining growth in the industry will boil down to Korea’s ability to keep a positive image and reputation, Jeong emphasized.

“It’s about whether Korea is credible and clean,” he said. “Right now, we’re seeing a lot of patients who hear about our doctors from agents and acquaintances. But if people know about Korea, its brand and integrity, more people will look into visiting Korea for medical treatment.”