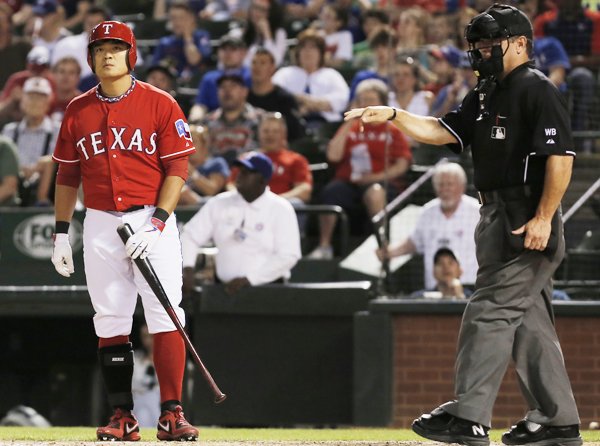 Choo Shin-soo reacts after striking out in the seventh inning Saturday against the Houston Astros in Arlington, Texas. The Rangers lost, 6-5, in 10 innings. [AP/NEWSIS]

At the beginning of the 2014 season, Choo Shin-soo seemed on track for a monster debut with the Texas Rangers after signing a seven-year, $130 million contract over the winter. But after struggling to play for the past two months despite an injury to his left ankle, it might be time for the last-placed Rangers - who are 24.5 games behind the Oakland A’s in the American League West - to sit down Choo and let him heal.

After a May 8 game against the Colorado Rockies, Choo was hitting .370 and his on-base percentage (OBP) was .500. Dallas-Fort Worth media outlets praised the 31-year-old as the world’s best leadoff hitter.

But Rangers fans have witnessed Choo have the worst June and July of his career. After hitting .179 in 26 games in June, he hit .208 in July. His August average through three games is .077. Overall, his batting average has plummeted to .234 and his OBP, his specialty and the biggest reason the Rangers signed him, is .342. Choo’s OBP the last season with the Cincinnati Reds was .423, the second highest in the National League.

Choo hurt his ankle stepping on first base in a game against the Oakland A’s on April 22. The situation was made worse by Choo’s decision to stay in the lineup and Rangers’ management allowing him to do so.

After the game, Choo missed five games, and Rangers Manager Ron Washington said in an interview that Choo might not be 100 percent for the rest of the season, but the team needed him on the field because several other players - notably first baseman Prince Fielder - were sidelined due to injuries. Since he had been one of the Rangers’ hottest hitters, Choo continued to play, mostly as a designated hitter.

But it didn’t take long to see that Choo and Washington made some poor choices. In 78 games from May 8 to Monday, Choo hit .192 with six home runs and his OBP was .286. In a clear indication of his running problems, Choo has not attempted a steal since May 6. Nor has he been placed on the disabled list.

The Rangers handling of their $130 million outfielder is even more suspect given their dismal performance. Texas is last in the American League West with an MLB-worst record of 43-68 (.387 winning percentage). They have zero chances of going to the postseason.

Choo also seems to regret continuing to play. “I obviously made a bad decision,” Choo was quoted as saying in a recent interview with Ilgan Sports, an affiliate of the Korea JoongAng Daily. “Since I was a player receiving a high salary, I felt like I needed to stay on the field for the team, which already had lost so many players in the beginning of the season. I made some changes in my hitting mechanics in order to get out of my terrible recent slump, but nothing has been working out.”

When a player like Choo struggles after signing a megadeal, he can soon become a target of criticism by fans and media, but Texas reporters who have been watching how Choo sacrificed himself for the good of the team are exhibiting restraint. Instead, they are calling out Rangers management for keeping Choo in the lineup.

“It looks like Washington is only interested in protecting his job,” said baseball analyst Song Jae-woo. “It is also questionable whether the Rangers have a good system to medically take care of their players. The Rangers already have lost so many players, and their ace pitcher Yu Darvish has missed several starts because of one [neck] injury.”

It has been a nightmarish season for Choo and the Rangers, but he has six more years remaining on his contract. If Rangers management expects to see Choo play in April 2015 like he did in April 2014, they better tell him to put away his batting gloves and see a doctor.