Reforms needed more than ever

Reforms needed more than ever 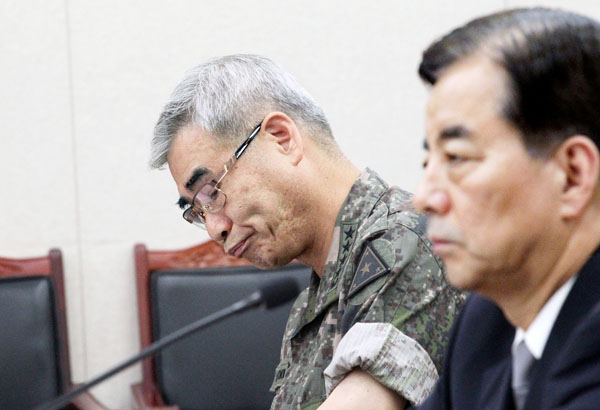 It appears the Ministry of National Defense’s skills have improved as it has dealt with the case surrounding the abrupt death in April of a young Army conscript who was found to have endured routine physical and sexual abuse and harassment at the hands of his fellow soldiers.

Military prosecutors stealthily indicted six soldiers involved in the scandal, following the July 30 by-election on a hot weekend afternoon when not many people were paying attention to the news. Then came the usual routine. The ministry pledged to give them the maximum sentence, and the usual Saturday emergency meeting was called. We have heard the same promise to “eradicate the source of evil” for decades now.

The Military Human Rights Center revealed the violence and harassment that the 23-year-old private, identified only by his surname Yun, was forced to endure. The harassers put an anti-inflammatory ointment on his genitals, made him lick the spit from the floor, gave him IV fluid and then assaulted him again after he recovered. Private Yun was tormented.

The defense minister said it was a shameful incident. But we are more ashamed of the Defense Ministry. If they had learned anything from Minister of Maritime Affairs Lee Ju-young, the ministry officials would have visited the site of the incident and knelt before the victim’s family to apologize.

The incident has shaken Korean society, and critics have demanded the Ministry of Defense to carry out a complete overhaul. The military is already deeply distrusted. The authorities have long deceived the citizenry, telling us that harassment and violence had already been rooted out of the military.

Yun’s brother-in-law, who is a doctor, and his uncle, a lawyer who served as a military judicial officer, played a crucial role in publicizing the case. People now feel that Private Yun’s death could have been covered up, with the organization claiming it was death by asphyxiation. Moreover, the reserve forces are writing online posts to prevent further harassment. They have even urged soldiers to run away if they cannot bear the violence and harassment. This is the reality in Korean society.

We know the military authorities will eventually downplay the issue and move on. But the defense ministry on the watch is more serious than the “soldiers on the watch list.” The military cannot remain a sanctuary because of the confrontation against the North. We can afford to hesitate and must try small- and large-scale experiments to change the military.

Most of all, we don’t want to see another defense minister with a general background. In Europe, there have been numerous female defense ministers. Civilian control of the military is a principle for any mighty armed forces in any developed country. The ROK Armed Forces should not be isolated.

There is only one way to keep commissioned and non-commissioned officers disciplined. What the career soldiers fear the most is not the North Korean Communists, but a pension cut. A dishonorable discharge would result in the forfeiture of pension benefits and they would be allowed to take only what they contribute. A pension cut will keep indifferent officers alert.

It may sound trivial, but the soldiers should be allowed to keep personal mobile phones in the barracks. Enlisted soldiers do not deal with confidential information. Various confidential documents from the National Assembly defense committee were disclosed to pro-Pyongyang groups, and an intelligence command brigadier general was found to have had an extramarital affair.

If we must choose between confidentiality and life, then we must choose life. Soldiers should be allowed to keep a mobile phone to record harassment and let such acts be known.

I don’t want to ride on the trend of asking the president to take accountability for everything. Nevertheless, I wonder if President Park Geun-hye has read the indictment of Private Yun’s case. Such serious violence cannot be found even 30 years ago. The President is the commander-in-chief, and it is the basic etiquette to provide proper treatment for the health of her citizens’ children. Frankly, the shooting rampage in June and the death of Private Yun are issues for which the president should apologize personally.

Meanwhile, Saenuri Party leader Kim Moo-sung’s reaction is noteworthy. When the military brass was reluctant to respond to the call to attend an emergency meeting, he shouted, “You must come at once!”

He also questioned the defense minister, “This is an obvious murder. Don’t you have children of your own?” That’s the role of politics. Politicians should act on behalf of the angry citizens. We cannot let the military correct itself. The National Assembly represents the citizenry, and there should be a committee on military reform. It would provide civilians with control over the military.