Let the pain of war not be forgotten

Let the pain of war not be forgotten 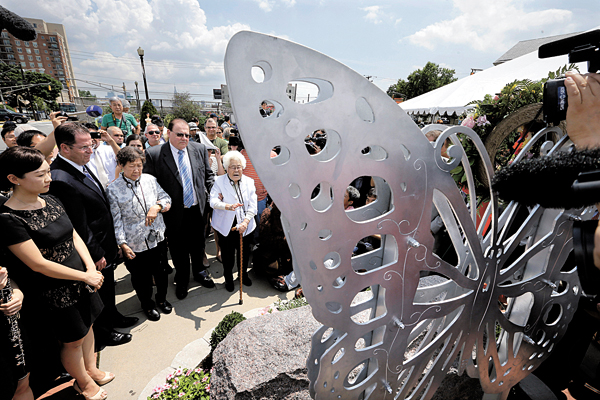 On Aug. 4, another memorial dedicated to “comfort women” ­- the women and girls forced into sexual slavery by the Japanese military during World War II - was unveiled in Union City, New Jersey. It is the seventh of its kind in the United States, and the plaque on the monument tells how countless women from Korea and other countries were forcibly held in military brothels by Japanese forces.

Manhattan can be seen from the monument, and the memorial for the victims of the Sept. 11 attacks can be found nearby. Every day, hundreds of thousands of cars commuting from New Jersey to New York pass by that site. The Union City authorities explained that the monument was built there so that more people could learn about the horrors of war crimes and mourn for the victims.

The Union City memorial is especially significant because it was initiated by the local government, whereas other monuments were promoted by local Korean communities. Union City commissioner Lucio Fernandez said that the comfort women issue was equivalent to the Holocaust. “It’s about human rights, it’s about education,” said Mayor Brian Stack. “Educating our youth about what took place in the past, so we don’t make the same mistakes again.”

Survivors Lee Ok-sun, age 87, and Kang Il-chul, 86, were the heroines of the dedication ceremony. They flew from Korea to attend the event and personally testify to the horrors they endured. Lee was shaking as she said, “We were abducted by the Japanese troops, but Japan claims that no daughter of Korea was taken. Wartime sex slavery was a slaughterhouse.” Many residents who attended the ceremony cried. Carmen Rivera was one of them. “I find the ladies very brave. I am proud of them. I will pray for them every day now,” she said.

Lee’s testimonies also targeted the Korean government. “This issue should be resolved between the nations. But we haven’t received an apology, even though we have gathered in protest every Wednesday in front of the Japanese Embassy for years, in rain, in snow, in cold and in heat,” she said. “We have come so far to the United States, as we couldn’t do this by ourselves. Please help us regain our honor.” For years, the victims have desperately publicized that they themselves are the evidence of the forced mobilization that the Japanese government so adamantly denies. We need to ask ourselves what the Korean government and Koreans can do to receive a sincere apology from Japan.