During a tough year, Choo joins the 1,000-hit club

During a tough year, Choo joins the 1,000-hit club 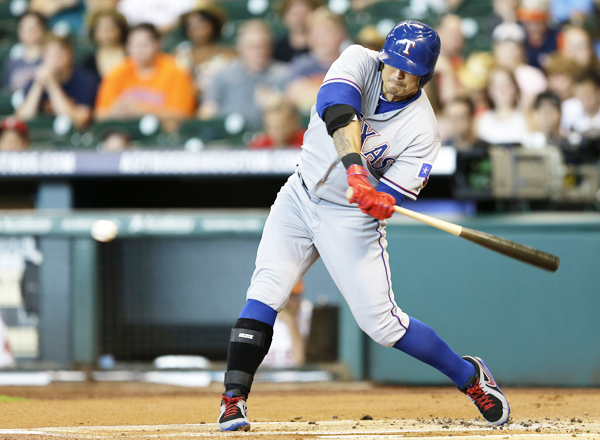 Texas Rangers leadoff hitter Choo Shin-soo doubles to start the game against the Astros on Saturday in Houston. It was the first of four hit for Choo, who has been hampered by a sprained left ankle. [AP/NEWSIS]

Choo Shin-soo of the Texas Rangers went four for five with a double against the Houston Astros on Saturday to record his 1,000th Major League Baseball career hit.

Rangers ace Yu Darvish entered the game with a 3-0 record and 1.52 ERA in three appearances at Minute Maid Park, but couldn’t repeat that kind of performance this time around as he allowed six runs in four innings while striking out seven. The Rangers lost, 8-3.

Starting as designated hitter and leading off, the 31-year-old Choo was only one for 17 in his career against Astros starter Scott Feldman. But he blasted a leadoff double on the third pitch - a cut fastball - from Feldman to left center field, then singled to center in third inning. Feldman struck out Choo with a curveball in his third at bat in the fifth inning.

Before the game, Choo’s .152 average with runners in scoring position was the third-worst in the American League (among hitters with at least 503 at bats), but he singled to right with runners on first and second in the seventh inning to load the bases and Rangers shortstop Elvis Andrus delivered a sacrifice fly to right to score Geovany Soto.

In his last at bat in the ninth inning with two outs and the bases empty, Choo collected his fourth hit of the game, connecting with a 99-mile-per-hour fastball from Mike Foltynewicz for a single.

Choo had been struggling through with an ankle sprain he suffered in April against the Oakland Athletics, but over the past five games he has hit .450 (nine for 20) with a .476 on-base percentage (OBP). After Saturday’s game, he was hitting .248 with a .350 OBP.

Choi Hee-seop of the Kia Tigers, who once played for the Chicago Cubs and Florida Marlins, had 220 hits, including 40 home runs, when he joined the Korea Baseball Organization in 2007.

“He had hard time dealing with fastballs this season, but it looks like he is doing well lately,” said baseball analyst Park Dong-hee. “He had no problems driving Foltynewicz’s 99-mile-per-hour fastball.”

Darvish got off to a shaky start, walking the Astros’ Robbie Grossman and designated hitter Chris Carter in the first inning. Both scored on singles by first baseman Jon Singleton and third baseman Matt Dominguez.