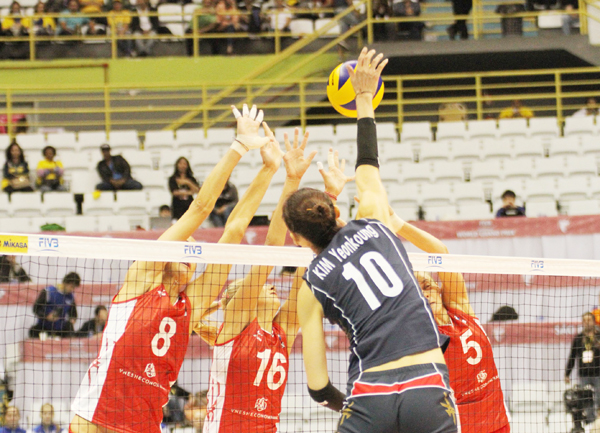 Kim Yeon-koung of Korea spikes during a match against Russia in the 2014 FIVB Volleyball World Grand Prix on Sunday, local time, in Sao Paulo, Brazil. Provided by FIVB

Kim Yeon-koung, who is considered one of the best female volleyball players in the world, led Korea past Russia by scoring a record-breaking 42 points in a single Grand Prix match.

Korea’s first back-to-back win over Russia in the World Grand Prix is only the fourth victory in their 22 total matches. Kim’s 42-point finish was the highest score ever achieved by a player in a single match, breaking the record of 41 set by Katarzyna Skowronska-Dolata of Poland against Russia last year.

“I didn’t realize I scored 42,” said 25-year-old Kim. “I was just focused on winning as we had lost the two previous matches [against world No. 1 Brazil and No. 2 United States]. We studied what we did in the previous matches and tried to improve in this one, and I think that helped us beat Russia tonight.”

Russia jumped out to a 6-3 advantage in the first game after a spike by Natalia Goncharova. Korea rebounded to take an 11-10 lead, but was plagued by turnovers and the Russians won the game, 25-21.

In the second game, Russia led 12-7, but Korea’s defense stiffened and the offense came alive behind the 192-centimeter (6-foot-3) Kim to build a 19-16 lead. Korea went on to win, 25-21, with Kim blocking Yulia Podskalnaya for the final point.

Kim dominated early in the third game, but Russia managed to put together a run to lead 16-13. Korea then took advantage of Russian mistakes to retake the lead 19-18 before winning, 27-24, on a Kim Hee-jin spike.

Leads continued to change hands in Game 4, but Korea stayed ahead following a second technical timeout and then scored four points in a row to build a 20-16 lead. A backcourt spike by Kim Yeon-koung sealed the 25-22 win and the match.

Korea stands at 3-3 after beating Russia and will go to Macao to battle China on Friday, Japan on Saturday and Serbia on Sunday.

Korea overpowered both Thailand and Germany by scores of 3-1 earlier this month and lost to Serbia, 3-1. In order to advance to the final round, Korea must finish in the top four of its 12-team group.

“We expect Kim will continue to lead us like she did tonight,” said Lee Sun-goo, the national team coach.

After losing to Korea earlier this month, Germany Coach Giovanni Guidetti was effusive in his praise of his opponent’s star. “I think Kim Yeon-Koung is the best player in the world,” said Guidetti. “I have not seen anyone like her in the past 30 years.”