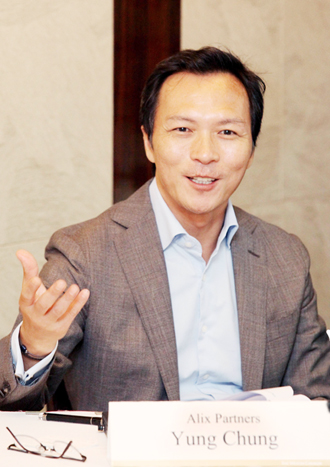 Yung H. Chung, representative director of AlixPartners’ Korea office, sees an increasing amount of restructuring among small and medium-size businesses in the next few years as the economy is expected to grow slowly until 2016 at least.

In an interview with Korea JoongAng Daily last week, Chung, an expert on corporate restructuring for more than 20 years, expressed alarm about forthcoming changes in industries made up of thousands of small and medium sized exporters in an export-driven economy.

“We had forecast long-term economic distress in the Korean economy and that’s why we decided to come here in 2012,” said Chung said. “During such a long-term economic recession, exports of Korean conglomerates will reach a plateau, causing falling margins for first- and second-tier suppliers.”

AlixPartners is a global business advisory firm that has been involved in several high-profile turnaround and bankruptcy assignments, including GM’s Saab division, Kodak and Kmart. Before entering the country, it played a role in the restructuring of a number of Korean businesses.

Citing the case of shipbuilder STX Group, Chung said small and medium exporters in the country would adopt a “holistic turnaround” approach to corporate restructuring.

“The very first problem of the STX crisis that triggered a domino collapse of the group’s affiliates began in the group’s Dalian Shipyard, which incurred at least 100 billion won [$97 million] in costs a month,” Chung said. “If the group had focused on fixing fundamental problems from the beginning, it wouldn’t have invited such a crisis.”

Chung said the capacity of the Dalian shipyard had been way too large.

“It was not a matter of providing liquidity for the shipyard, but of downsizing the capacity, which means fundamental restructuring.”

The AlixPartners Corporate Distress Index indicates an increasing number of companies reaching a level of high risk in Korea, which the firm believes requires restructuring.

The index shows 9 percent of 1,606 listed companies categorized in a “high risk” group and 17 percent in an “alert” group. In total, the firm views 26 percent of public companies as endangered in terms of degree of distress. Distress levels are the highest in shipping, followed by finance, construction and real estate, heavy equipment and culture and leisure.

As for the atmosphere of the M&A and corporate restructuring field in Korea, Chung advised that “value creation” and “competitiveness” should be the key priorities.

“Still, there is negative sentiment about corporate restructuring in Korea,” Chung said. “It’s probably because the market doesn’t recognize the two key purposes of restructuring: value creation and competitiveness.”

Creating new value and increasing competitiveness is the essential concept of corporate restructuring.

For the Korean government, which plans to expand private equity funds in order to boost the local M&A market, Chung said it was important to make the funds devise better investment strategies.

The Korea office of AlixPartners announced the findings of its annual experts survey and accompanying study into the outlook for corporate restructuring across the Asia Pacific region late last month.

Based on interviews with 150 bankers, lawyers, fund managers, government officials and other restructuring experts from across the Asia-Pacific region, the report highlighted that levels of corporate stress are expected to continue to rise across a number of countries and industries, with 70 percent of respondents expecting restructurings to increase in the year ahead, compared with 67 percent of respondents last year.