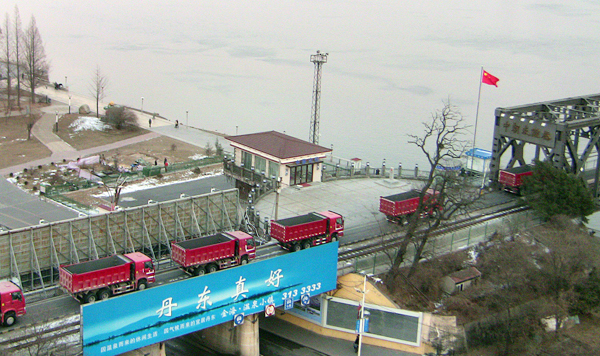 It is not such a challenging problem, but it has remained unsolved for more than six months. Government agencies have given various guesses but have no clear answer. The problem is serious because it cannot be left unsolved.

As we all know, China is North Korea’s economic lifeline. The North is especially dependent on China for petroleum, which keeps its factories and cars running. It is no exaggeration to say that the most effective method of pressuring North Korea is by turning off the valve to the oil pipeline provided to it by China.

Thankfully, China’s customs announce monthly trade statistics. Based on international standards, it releases the import and export volumes of various commodities from the past month, and oil is one of the items whose trade volume is made public.

Something strange has begun to show since the January numbers. Petroleum trade, which had always been the largest part of China’s export to North Korea, fell to zero. A government source remained prudent and said, “It has happened before, and North Korea could have some reserves.” After three months of no oil exports, he said that perhaps China was pressuring Pyongyang.

China may have suspended petroleum exports as a sanction after North Korea conducted the third nuclear test. The wishful thinking has been reported by some media with the interpretation that Beijing has finally begun to pressure Pyongyang.

It takes determination for China to turn off the valve on the pipeline. If the oil pipelines are not flowing for a long time and the proper viscosity is not maintained, the pipelines could be damaged and China will suffer a loss. More fundamentally, suspension of oil supply could create chaos in the North and stir up the status quo.

Let’s say China has actually turned off the valve. Six months after no oil supply, as the statistics indicate, there would have to be turmoil in North Korea. But cars are still running in the streets of Pyongyang. An expert said, “Well, there is no way of knowing, but the pipelines may not be completely blocked,” and suggested that North Korea could be diversifying its oil suppliers to Russia and other petroleum producers. But this is not very convincing. It would not be easy for North Korea to break international sanctions and immediately replace 500,000 tons of Chinese oil from elsewhere.

Six months of no oil imports is truly puzzling. Trained professionals are not enough to solve the mystery, so I looked for an answer. I contacted a source involved in trade between North Korea and China. He simply said, “You are too naive trusting China’s statistics.”

* The author is a Beijing correspondent of the JoongAng Ilbo.